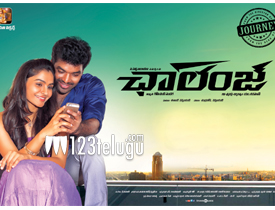 Film maker M. Saravanan, who directed ‘Journey’ in 2011, recently made an action entertainer titled Valiyavan. Starring Jai and Andrea Jeremiah in lead roles, this movie has been dubbed into Telugu as ‘Challenge’ and has hit the screens today. Let’s see how it is.

Vinod (Jai) works as an marketing executive and enjoys life with his friends. One fine day, a young girl named Subhiksha (Andrea Jeremiah) proposes to him. Vinod declines her proposal at first but accepts it after a while.

As time passes by, Subhiksha puts a condition to Vinod and asks him to knock down the Olympic boxing champion Ashwin (Arun Chowdary). Vinod takes up the challenge without any second thought and starts learning kick boxing.

Why did Subhiksha ask him to challenge Ashwin ? What is her motive ? Does Vinod end up winning the challenge ? That forms the rest of the story.

The boxing episode has been executed in a superb way during the climax. Jai did an impressive job throughout the movie and particularly his performance in the climax fight is good.

Heroine Andrea Jeremiah looks hot and her glamour quotient is an added advantage for the film.  First half of the movie has certain decent romantic moments.

Arun Chowdary’s negative role is impressive as the talented actor excels in his performance. Second half proceeds with a bit of seriousness as the flash back episodes along with the pre climax will have a good effect on the mass audience.

There is no intensity in the proceedings which is a must in movies which have a motive. Saravanan’s gripping narration is clearly missing and the unconvincing screen play is also a big disappointment. Many scenes have been dragged too far and tend to get boring for the audience.

The run time is also a tad too long as many scenes could have been easily trimmed to make it more engaging. Even though the climax fight is good, it is ended abruptly. Misplaced songs and the unfamiliar Tamil star cast are also other liabilities for the movie.

Cinematography by Dinesh Krishnan is a big asset as he captures all the beautiful locales well. D Imman’s background score is quite impressive but the dubbed songs do not sync well for the Telugu audience.

Editing by Subarak is below par as many scenes and songs can easily be chopped off. Dialogues by Shashank Vennelakanti are good and the makers have not compromised on the production values.

On the whole, Challenge is good only in bits and pieces. The movie lacks intensity and is dragged out in many areas. Few entertaining scenes in the first half and a action packed climax are the saving grace. However, a better narration and crisp run time could have made a lot of difference to the result. A missed opportunity.