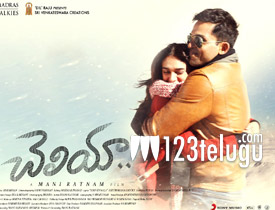 Whenever there is a Mani Ratnam film coming up, there is huge curiosity all over. The ace director’s latest film is ‘Cheliyaa’ which has Karthi and Aditi Rao as the lead pair. Let’s see whether it lives up to its expectations or not.

The story of the film is set during the Kargil war of 1999 where doctor Leela(Aditi Rao Hydari) falls in love with a fighter pilot named Varun(Karthi). The romance is kindled right away but Varun’s commitment phobic attitude keeps pushing Leela away from the relationship.

The twist in the tale arises when Karthi is jailed in Pakistan because of the tense war situation. Rest of the story is as to how Karthi frees himself from Pakistan and wins his love all over again.

The first thing that hits you right away in Cheliyaa is the astounding camera work. Ravi Varman’s cinematography is jaw dropping as the Kashmir visuals, lead pair and the entire movie set up are shown in a super classy way. Karthi looks dashing as the fighter pilot and pulls off a difficult role with ease. His performance during the climax is top notch.

Aditi Rao makes a stunning south debut. She looks drop dead gorgeous as Mani Ratnam has showcased her in a never before seen way. Aditi’s emotional performance is the backbone of the film as she delivers in both the glamor and acting departments. The first half of the film is filled with typical Mani Ratnam romance, striking lead pair’s chemistry, and good drama.

A R Rahman’s background score is yet another basic asset of the film. The way his music elevates the emotions needs a special mention. The climax of the film has also been executed well. The scene between the lead pair and the emotions showcased during this time works well.

After scoring all the brownie parts during the first half, Mani Ratnam makes the romantic drama quite slow during the later part. Things move at a snail’s pace and this can go against a certain section of the audience completely.

Karthi’s characterization during the second half looks a bit here and there. Proper justification is not given as to why he is avoiding the relationship. If these scenes would have been dealt well, the second half and the film would have made a lot of sense.

Except for two songs, A R Rahman’s music score is just about okay. Some hit songs could have elevated the film even better.

Cheliyaa is one of the best-looking films in the recent times and credit should go to the makers for choosing some amazing locations and spending the right money to get the air force setup look natural. Dubbing done for the film looks good and so were the simple and easy dialogues. The styling done for both the stars is stunning as Karthi looks apt in those army attires.

Coming to the director Mani Ratnam, he does an okay job with the film. His love for visuals, romantic conversations and music are intact in Cheliyaa as he showcases all these with a unique backdrop. But he messes up the wonderful drama during the second half as things get side-tracked many times. The way Karthi escapes from Pakistan, repeated love scenes between the lead pair can make you impatient.

Cheliyaa is one film which will surely draw mixed reactions. While one section of the audience will just love Mani Ratnam’s romance and taking, the regular audience will find it very hard to enjoy this serious romantic drama. Karthi and Aditi Rao’s sizzling chemistry, entertaining first half are basic assets. But the slow and slightly dragged second half makes things a bit difficult. On the whole, all those who like slow but emotional romantic dramas can surely give this film a shot but for others, Cheliyaa is just an average film this weekend.