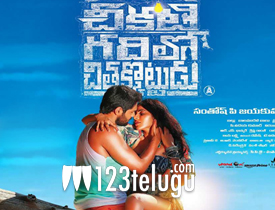 Chikatigadilo Chilakottudu has been promoted as the first adult comedy in Tollywood. The film featuring Adith and Hemanth has hit the screens today. Let’s see whether it lives up to all the hype or not.

Chandu(Adith) decides to get married and meets a girl(Nikki Tamboli) of his parents choice. He gets a rude shock as the girl’s parents ask him to take her daughter for a small trip to Bangkok so that the couple gets to know each other. Chandu decides to take his friend Shiva(Mirchi Hemanth) and his girlfriend along to enjoy the trip. The two couples reach Pattaya and start enjoying their holiday. But the place they are staying is haunted and is possessed by an evil spirit. The twist in the tale here is that the ghost’s only condition is to have a physical relationship with one of the boys. Rest of the story is as to how both Chandu and Shiva escape this tricky situation and come back to India.

The concept of the film looks good. As the film has been given ‘A’ rating, it has all the double meaning dialogues which will please the masses. Some of the strongest double meaning jokes have been used cleverly and will be liked by the youth.

Adith and Hemanth are decent in their respective roles and do not mind portraying cheesy characters. Heroine Nikki Tamboli is glamorous and provides super eye candy. The second half of the film is where most of the fun happens with the entry of many characters.

The best of the lot is Tagubothu Ramesh as he brings the house down with his hilarious comedy. Raghu Babu ably supports him and so did Satyam Rajesh in the role of a gay. The episode where the ghost goes after Raghu Babu and Tagubothu Ramesh has been executed superbly.

The first half of the film goes for a complete toss as the characters, story and conflict point are not at all established well. The comedy, songs, and scenes are so over the top during this time that you feel like going out of the theater.

There are some double meaning jokes which are outright vulgar and it is surprising to see how the censors have cleared them. Also, the biggest minus is that the director has not utilized the story well and should have added some serious emotion.
Technical Aspects:

Production values of the film are decent as the film looks rich in many areas. The camerawork is also decent but the songs act like big speed breakers in the film. As said earlier, certain dialogues are outright vulgar and sound cheesy. Editing is decent but the screenplay was very disappointing.

Coming to the director Santosh, his idea of making an adult comedy is good but his execution is below par. He starts the film on a disappointing note but packs good humor in the second half. His only drawback is that he has made this film keeping the adult comedy in mind. A bit of emotional connect to the ghost character and some seriousness in the proceedings would have made this film a lot better.

On the whole, Chikatigadilo Chilakottudu is one of the first straight adult comedies in Tollywood. Decent adult comedy in the second half keeps the audience engaged but lack of the seriousness in the plot and flawed narration makes this film go downhill. The makers have started a new trend and we need to see how many films in this genre will be made in the future. The film is a good concept gone bad kind of movie and is targeted only at adults and masses. Watch it if you have nothing else to do but be prepared for the bumpy ride which looks over the top most of the time.