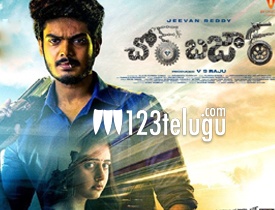 Young hero Akash Puri-starrer Chor Bazaar is out now. Let’s see how the movie is.

Story:
A Rs. 200 crore-worth Nizam diamond goes missing from The Royal Mummies Museum of Hyderabad. Police begin investigating the case. In the meantime, Bachchan Saab (Akash Puri) is a thief who tries to create Guinness World Record by removing maximum car tyres in 30 minutes. The police come to know that the diamond is in Chor Bazaar. What happened next? Did they find it? Who stole it? To know the answers, you need to watch the main movie on the big screen.

Plus Points:
Akash Puri is trying to get a mass image by doing out-and-out action movies. In the process, he accepted this film also. He performed with ease. His voice and dialogue delivery are extraordinary.

The director showcases Chor Bazaar’s people and their behaviours in a good manner. The art department needs to be praised for their hard work for the film. The camerawork is also impressive.

Minus Points:
The story itself is a big letdown for this movie. In addition, the screenplay is poorly written. The director failed to narrate the story in a proper way. No single character in the movie will be remembered because of their characterisations. Having actors like Sunil, Archana, and Subbaraju, the director completely failed to create powerful roles for them. There is no need to talk about the rest including the heroine.

Akash Puri also failed to create an impact with his action. Be it love scenes or action episodes, everything is unimpressive. Totally, the movie tests your patience with the inclusion of unnecessary scenes and irregular narration.

Technical Aspects:
Director Jeevan Reddy’s writing and direction are not up to the mark in this movie compared to his earlier film, George Reddy. The narration lacks clarity and his poor writing makes Chor Bazaar a below-average film. The background score and songs composed by Suresh Bobbili are not up to the mark. Cinematography by Jagadeesh Cheekati is nice. The VFX and production values could have been better. Editing by Anwar Ali is okay but could have been better if some scenes are trimmed off.

Verdict:
On the whole, Chor Bazaar is an outdated action drama. Akash Puri is the only saviour of the movie. The movie might workout for a few mass audiences because of the action episodes. Other than that. the film has nothing new to offer.