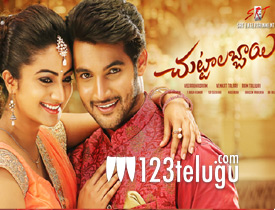 Young hero Aadi, is trying hard to score a hit in his career. In this process, he is now back with a commercial entertainer titled Chuttalabbayi. Directed by Veera Bhadram, this film has hit the screens today. Let’s see how it turns out to be.

Babji(Aadi), a recovery agent comes across a girl named Kavya(Namitha Pramod) who is on the run citing danger from her family. He helps her in a crunch situation but to his bad luck, Kavya’s brother(Abhimanyu Singh) mistakes that Babji is behind all this and starts chasing the couple.

Left with no choice, Bajbi brings Kavya to his village and introduces her to his family as his best friend. As time passes by, Kavya falls in love with Babji. When things seem to go just fine, Kavya’s family along with yet another gang attack Babji and his family.

Rest of the story is as to how Babji solves all his problems and ends up marrying Kavya.

Aadi looks decent in his role and has improved a lot with his screen presence and acting capabilities. He is good with his dances and also packs a punch in the action department. Though Sai Kumar has nothing much to do in the film, he brings a depth to the proceedings during the second half.

Once again, 30 years Pruthivi saves the film during the first half as all his comedy scenes have been handled well. The first half is just okay when compared to the second. Posani, Ali and Raghu Babu manage to bring some laughs here and there.

One of the biggest drawbacks of the film is the routine story line. The film is quite predictable and does not have much to offer in terms of novelty. Heroine Namitha Pramod is a weak link as a better heroine would have done wonders to the film.

Second half bogs down after a while as some routine comedy and outdated scenes come into the picture. Yet another drawback is the weak characterization. Right from the female lead, heroine’s brother to Sai Kumar’s wife, some decent artists would have made things better.

Production values of the film are quite rich as the makers have spent ample amount to showcase the film well. The camera work is also decent as it nicely depicts the village atmosphere. Editing is below average and so were the dialogues. Thaman’s music is good but one of his song during the second could have been avoided.

Coming to the director Veera Bhadram, he has done just about okay with his direction. He manages to narrate the first half well and even brings a decent interval bang. But the way he dealt the second half with lack of entertaining elements make things disappointing.

On the whole, Chuttalabbayi is one film which has an interesting first half. Aadi’s sincere performance and some good comedy by Pruthvi are basic assets. On the flip side, lack of novel story line and interesting moments during the second half makes this film worth a watch strictly for a few laughs.