Review : Climax – Just For The Climax 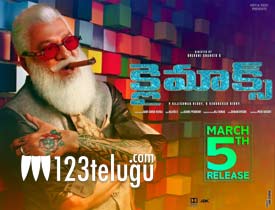 After a long time, senior hero Rajendra Prasad has played a lead role in this thriller. His crazy get-up, featuring a thick, long grey hair and beard, body tattoos and his character named Vijay Modi, piqued audiences’ interest. Let’s see how the film is.

Vijay Modi (Rajendra Prasad) is a filthy rich celebrity who lives life on his own terms. His three main goals in life are to become popular, a movie star and a politician by hook or by crook. In the process, he becomes a benami to the state minister and also amasses many influential friends and even enemies.

On a fateful night, Vijay Modi gets brutally murdered in his star hotel suite by a mysterious person. Cops begin investigation into the murder and the missing Rs 200 crores from his suite. Was he killed for the Rs 500 crore insurance policy? Or was he killed for the Rs 2,500 crore bank loan that he defaulted? And how is the title Climax related to the film? You will have to watch the movie to unveil the suspense yourself.

Rajendra Prasad as the eccentric and flamboyant Casanova Vijay Modi will engage the audience with his crazy get-up and no-filter dialogues. He is in his element in an unusual role. Debutant Sasha Singh as the young girl who seduces Vijay Modi is confident on-screen. She also oozes glamour in a pool song. Rest of the actors are mostly newcomers and they did a neat job.

The climax twist not only justifies the title, but also leaves the audiences impressed. Most of the film has been shot inside a star hotel, so the visuals look rich. Rajendra Prasad’s Vijay Modi character gets murdered in the first 20 minutes of the film and it sets the perfect stage for an interesting thriller.

Climax mainly suffers from its weak script. Even though the unusual titular character raises curiosity in all ways possible, the lackluster investigation scenes that follow his brutal murder dampen audience’s attention. The way such a serious investigation is carried out within a comical set-up dilutes the intensity of the proceedings. Also, the unimaginative investigative scenes don’t give you a feeling that you are watching a taut thriller.

As mentioned above, Bhavani Shanker’s screenplay meanders for the most part and disappoints big-time eventually. The film fails to cash in on the perfect setup created after Vijay Modi’s murder. Rawi Cumar Neerla’s cinematography is flashy and in-sync with the mood of the scenes. He uses a strong red light to bring out Vijay Modi’s inner eccentricity.

Rajesh’s background score is decent and aids the narrative. However, the songs he composed don’t leave a lasting impression. It’s nice to see a well composed and shot disco song in a Telugu film after a long time though. Editor Basva Pydireddy’s scissors should have been more sharper, especially in during the investigation scenes in the second half. The production values are decent for this medium budgeted thriller.

Barring the clever climax twist and the lead actor’s peculiar characterization, Climax movie has a very few positives going for it. Well-scripted and well-handled investigative scenes would have salvaged the film to a great extent. If you are a Rajendra Prasad fan, you may enjoy his Vijay Modi role that’s inspired by the notorious fugitives Vijay Mallya and Nirav Modi. And others may watch Climax with low expectations.