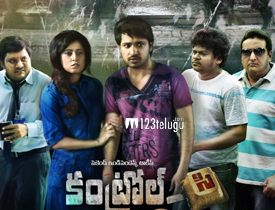 With horror movies being the trend in recent times, yet another film of the same genre, Ctrl -C has hits the screen today. Unlike other films, this film too tries to be different by terming itself as a software thriller. Starring Ashok and Disha as the main leads, let’s see how this unconventional film fares.

The film starts off by showcasing 9/11 attacks on the World Trade Center in New York City. Two Indian software employees who work there fortunately escape the attack and happen to stumble upon a hard disk during their escape.

After the attacks, they return to India and join a company in Hyderabad. One fine day, they look through the hard disk and find out that it contains some works of a scientist group who have been researching on controlling brains of human beings.

Unfortunately, the hard disk is coded and certain important details of the secret mission only open at specific times of the month. What is so special about this hard disk? What does it contain? and What is the relation between the lead couple and the hard disk? Watch the film to find out.

The biggest thing going for Ctrl – C is that the film belongs to a rare genre. Techno Thrillers are seldom touched in Indian Film Industry and the makers should be appreciated for going out of their way to conceive a story around this unique genre.

Disha Pandey looks beautiful and manages to do well within her character limitations. Ashok Bandreddy does an okay job for a debutante. The film’s background score in impressive and manages to elevate a few scenes.

The biggest negative point for the film is the screenplay and story line. Although the genre is new and exciting, the makers have completely fumbled on creating an interesting story. The film is extremely logic-less and by the time it reaches the end, things go haywire.

The ensemble cast is annoying in most of the scenes and the actions of these characters are confusing at times. The film begins with one concept but ends up with something entirely different.

The songs, which come at inconvenient times prolong the torture and should have been left at the editing table. The film gets stuck between wanting to be a thriller and a horror with comedy forced in many places.

For the budget that the film was made on, the production values are impressive. Music by Achu is mediocre but his background score is excellent. Editing is horrendous as the film jumps all over the place. Camera work is acceptable. Dialogues are just average.

Coming to director Sairam Challa, although he chose an entirely new genre for his debut, he clearly fails in making the most of the opportunity. The film lacks clarity and jumbles into one big mess by the climax. A more logical story line with proper screenplay could have made this an entertaining movie.

On the whole, Ctrl – C tries something new but sadly stumbles at the finish line. The story is confusing, and the overall movie lacks clarity. The climax will leave the audience perplexed and the film ends up being a weird and unconventional thriller. If you are still interested in watching this film with unique genre, wait for it to come on TV.