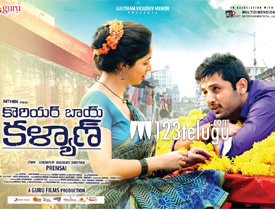 The wait is finally over as Nithin’s much delayed film, Courier Boy Kalyan has hit the screens today. Directed by debutante Prem Sai, this film has Yami Gautam as the female lead. Let’s now see whether the film is worth the wait or not.

Kalyan(Nithin) is a happy go lucky youth who falls in love with Kavya(Yami Gautham). In order to woo her, Kalyan takes up a courier boy’s job and starts visiting Kavaya’s office with several parcels daily.

Twist in the tale arises when Kalyan is asked to deliver a parcel which is related to a huge conspiracy involving a renowned group of doctors. Things take an ugly turn when the dreaded gang starts following Kalyan for the parcel.

What is in that parcel ? What will Kalyan do now ? and How will he escape this deadly situation ? That forms the rest of the story.

Story of the film is quite new and has a unique premise. The way it has been set in a contemporary approach needs appreciation. Nithin has done a decent job and carries the film on his shoulders. He is exceptionally good in all the romantic scenes and shares a decent chemistry with Yami.

Ashutosh Rana is ok as the corrupt doctor. Yami looks elegant but does not have much to do in the film. First half of the film has some interesting moments. The romantic track is good and the twists that come during the interval make way for a racy second half.

The major drawback of Courier Boy Kalyan are the songs. Even though they sound good and have been shot well, they are a huge disturbance. It clearly shows that the makers have added these songs only for commercial viability but sadly, they hamper the proceedings big time.

Music by Karthik and Anup Rubens is pretty good, but sadly, the songs are misplaced. Background score is decent and elevates the film well. Screenplay is ok in the first half but wobbles a bit during the pre-climax. Editing is below average as the makers could have edited out at least two songs. Camera work is decent and the way all the thrills have been conceived look fresh.

Coming to the director Prem Sai, he has done a decent job with his debut. He chooses a interesting subject and sets it up well. But sadly, he too falls trap to these commercial aspects and tries to add elements which spoil the mood of most of the time.

When you try to induce unnecessary commercial elements in a very interesting and engaging concept, the result is Courier Boy Kalyan. The film which could been a decent thriller is seriously obstructed with the arrival of songs and a hurried up climax. But a breezy first half, and some engaging thrills salvage the film which ends up as just an ok watch.