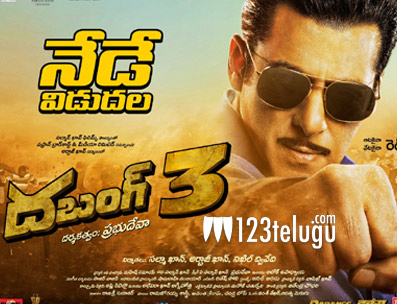 Dabangg 3 is a film that has created a superb buzz all over. The film has been dubbed in Telugu and is out today. Let’s see how it is.

Chulbul Pandey(Salman Khan) is a very honest cop who does his duties with a lot of sincerity and fun. One fine day, he saves some girls from a mafia racket which is run by Bali Singh(Kicha Sudeep). Things get worse and Bali Singh enters the scene to teach Chulbul a lesson. To the shock of the viewers, a twist is revealed that Chulbul and Bali Singh have a past that is connected to Khushi(Saiee Manjrekar). Who is this Khushi? What does she have to do with Chulbul and what is the whole fuss? To know the answers, you need to watch the film.

Salman Khan is the star of the film as he is so lovable as Chulbul Pandey. The way he walks, talks and dances are a feast for his fans in the films. The fans will go beserk to the entry scene of Salman. The climax fight which he showcases his six-pack body is also awesome. Salman romances both the heroines well and share god chemistry.

Sonakshi Sinha continues where she left off in Dabangg 2 and is superb to watch with Salman. Her dialogues are quite special. Saiee Manjrekar makes a solid debut and looks beautiful in Indian attires. She shares solid chemistry with Salman Khan.

Kiccha Sudeep is superb as the main villain. His screen presence is superb and the manner in which he confronts Salman is also very good. Dances and songs are superb and have been composed well. Salman is a treat with his dances.

There is absolutely no story in the film as the makers have taken the character of Chulbul Pandey and weaved some comedy and action scenes around it. There is also no flow in the film which is a drawback in the second half.

Also, the Telugu dubbing is horrible and this takes away a lot of emotions and depth in the dialogues. The dialogues are cringe-worthy and things should have been made better to make this film a breezy watch. The director Prabhu Deva focused more on style than substance and this where the film goes down.

The production values of the film are top-notch. Dances in the songs are superb as music by Sajid Wajid is amazing. The camerawork is superb as the fights and songs have been showcased amazingly. As said earlier, Telugu dubbing is very bad. Coming to the director Prabhu Deva, he has only kept Salman’s fans in mind and has given them what they wanted. In all this, the basic drama is missing in the film.

On the whole, Dabangg 3 is for sheer Salman Khan fans and they will love Bhai in a full-on action avatar. Salman carries the otherwise weakly written film on his shoulders and gives the necessary entertainment. But the biggest drawback is the Telugu dubbing which takes away all the interest of the audience and makes this film a below average watch in Telugu. It is better that you watch the film in Hindi for a better viewing experience.