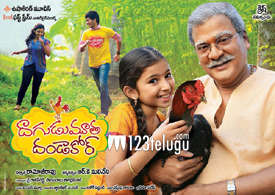 Continuing with the trend of remaking Tamil films, Ramoji Rao and director Krish have ​joined hands to rema​ke the super hit Tamil flick Saivam​. Titled Dagudumuta Dandakor​, this film has Rajendra Prasad in a lead role and has hit the screens today​. Let’s see how it is.

Raju ​Garu​ (Rajendra Prasad) is one of the most respected persons in his village. He ​lives with his son and grand daughter while the rest of his family is based in the city. Raju Garu owns a pet cock which is particularly dear to his grand daughter.

During one of the summer vacations, the entire family gets together and spends valuable time with Raju Garu. Twist in the tale arises when a mishap occurs in the family. The local priests in the village suggests the family to perform a religious ritual which involves the slaughtering of their pet.

What will the family do now ? Will they follow their tradition and sacrifice their beloved pet ? That forms the rest of the story.
​​
Plus Points:-

Dagudumutha Dandakor​ is high on traditional values and ​brings the age old joint family culture ​once again to Telugu films. The way family bonding ​and relationships ​ha​ve been showcased is ​just wonderful. The nativity​, village atmosphere and the mindset of the people living away from the villages have been dealt supremely well.

Rajendra Prasad gives a mature performance and holds the film together. Even though he does not have much dialogues, his expressions speak volumes of his talent. The little girl who played a key role is very good. She is the main stay and showcases wonderful expressions​ throughout the film​.

Comedy created around the family and child artists is decent. First half of the film is entertaining with good ​family episodes. The message showcased about ​harming ​animals is also dealt ​well.​

After setting up a decent first half, first fifteen minutes in the second half gets a bit bogged down. Some unnecessary scenes emerge and spoil the flow of the film. Yet another major drawback of the film is the lack of emotional depth. The film had enough space to evoke emotions but the makers could not utilize the opportunity well.

Right from the start of the second half, the film gets predictable and one can easily know what is going to happen next. This film a bit slow for commercial movie lovers and has absolutely no masala elements.

Production values of the film are very good and showcase the village atmosphere wonderfully. Camera work is ​top notch and so is the art direction. Screenplay of the film is decent and flows without any complications. Music is also good and the traditional background score lifts the film well.

Rajendra Prasad’s make up looks odd as proper care should have been taken to make his character look believable. Dialogues are emotional. Coming to the director R K Malineni, he has managed to do a decent job with his narration and sets the remake in a nice tone. The only place where he falters is giving emotional depth to the film.

On the whole, Dagudumutha Dandakor is simple and showcases decent family values. Interesting first half and good performance by Rajendra Prasad are basis assets. On the flip side, a predictable second half and lack of emotional depth go against the film. All those who like rustic village dramas with a lot of traditional values will end up liking this film.