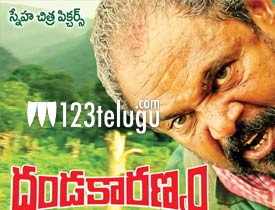 People Star, R Narayana Murthy’s films are in a different league altogether. The hard hitting star is now back with his latest presentation Dandakaranyam. Let’s see how it is.

Koteswara Rao(Narayana Murthy) is from a middle class family who fights for the betterment of Dalits and different tribals living in the Danda Karanyam forest belt near Sri Kakulam, Odisha, Bengal, Jharkhand and Chhattisgarh.

As time passes by, he transforms into a powerful naxalite leader called Kottanna. He soon becomes a threat to the industrialists and politicians who want to mine these forests for bauxite, iron ore and other minerals. The war between these rich landlords, government officials and Kotanna, forms the rest of the story.

Narayana Murthy is the heart and soul of this hard hitting film. The way he carries the pain of the backward community and becomes their messiah is just wonderful. As usual, Murthy is hyper active in his role and mouths superb dialogues which evoke social awareness.

The way the fertile lands and innocent villagers are exploited for money and power has been showcased wonderfully. Be it the lives of these naxals or the problems of the tribals, you get connected to their pain and emotions right away.

As usual, dialogues and some hard hitting emotions take center stage in this film as well. The locations chosen by Narayana Murthy are realistic and showcase mother nature in a beautiful way.

In a very revolutionary and a social film like this, it is very hard to find minus points as everything is made from the heart. Having said that, the length of the film is very long and gets tedious at times.

After setting up the film nicely till the interval point, Narayana Murthy deviates from the topic and adds some revolutionary songs just to create more awareness on the subject. Also, some more known actors would have made a lot of difference.

For Danda Karanyam, Narayana Murthy has tried his hand at composing the music as well. One can say that when compared to his previous film songs, this album is slightly low. Screenplay is good during the first half but goes wayward during the beginning of the second part.

Coming to the director Narayana Murthy himself, he has done a wonderful job with the film. With the limited resources that he had, Murthy managed to showcase the problems of those living in these dense forests wonderfully.

Every Narayana Murthy film deals with different problems of backward communities. Danda Karanyam is also one such film which depicts the issues of Adivasis who live in dense forest areas. Narayana Murthy’s emotional performance as the naxalite leader is the biggest highlight and makes you engrossed to the proceedings. We suggest you to watch Danda Karanyam with an open heart and support such films as much as possible.

Note : Since Danda Karanyam does not belong to the regular commercial league, it is unfair to rate the film with numbers. 123telugu is going with an N/A rating and appreciates the efforts of People Star Narayana Murthy.