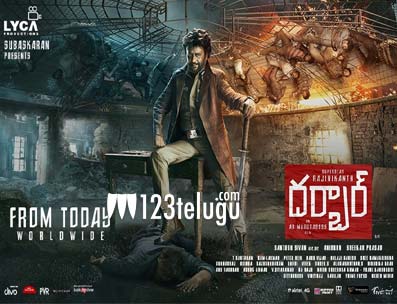 The Sankranthi season has well and truly started with the release of Darbar today. Let’s see how it is.

Aditya Arunachalam(Rajinikanth) is a very strict police commissioner of Mumbai. He keeps killing all the notorious criminals one after the other without any mercy. The Human Rights commission starts an enquiry and in their investigation find out that Aditya is actually hunting the killer of his daughter Valli(Nivetha Thomas). Who killed Valli? What is the whole story behind the murder? and how are Nayanthara and Sunil Shetty connected to all this? That forms the rest of the story.

As expected, it is a Rajini show all the way till the end. The star hero has been showcased in a superb manner by Murugudoss and reminds us of vintage Rajini. The superstar is extremely good as the bad cop as his style and mannerisms are too good for the fans.

Sunil Shetty is super stylish as the main villain and brings a good depth to the film. Nayanthara looked beautiful but did not get much to do in the film. Yogi Babu was okay in his role and so were the supporting actors.

The cop setup in Mumbai has been showcased well as the first half of the film has gripping investigation scenes. The way the cop drama and crime angle featuring Pratiek Babbar was showcased is very good.

Last but not the least, Nivetha Thomas gives a solid performance as Rajini’s daughter. The combination scenes of both father and daughter have come out quite well and evoke good emotions in both the halves.

After a gripping first half, the tempo in the second half drops a bit as the film is rushed in the last fifteen minutes. After showcasing so much crime and investigation to nab Sunil Shetty, one expects a solid climax but that is not the case.

Also, the story of the film is routine as the cop story is given a new twist with screenplay. Sunil Shetty is not utilized properly at all as his role is very weak and has no depth and power in the second half. After Nivetha’s death, things should have been even more gripping but director Murugudoss runs out of ideas and ends the film in a hurry.

Music by Anirudh is ordinary as none of the songs click in the film. But Anirudh has given a rocking background score as it lifts the film to another level. Production values of the film are very good and so was the Telugu dubbing. Editing is decent and production design showcasing the Mumbai cop world is amazing.

Coming to the director Murugudoss, he has done a decent job with the film and narrates the first half in a gripping manner. He pleases the fans in a big way and also showcases Rajini in a mature manner. Story wise there is nothing new from him but if he would have made the latter part of the second half good, things would have been even more gripping.

On the whole, Darbar is a serious cop drama which has some engaging moments going it’s way in the first half. But things get bogged down in the last twenty minutes making the film a bit dull. Rajini’s fans will love their star hero as he is superb. As the other biggies are also releasing, we need to see how this film will cope up the heavy competition. Apart from that, this film ends up as a decent watch this week.