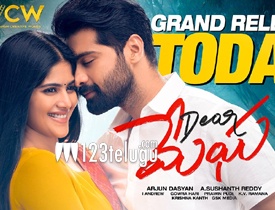 Dear Megha is a film that has been promoted a lot in the last few days. The film has hit the screens today and let’s see how it is.

Megha(Megha Akash) is a college-going girl who loves Arjun(Arjun Somyajulu). But Arjun does not pay heed to her and leaves the college. Three years later, he meets Megha again, and love blossoms. But in a tragic turnaround of events, the couple depart. Megha moves on with her life and meets Adi(Adith Arun). Just when things are getting back to normal, Arjun come back. What will Megha do? Whom will she pick? That forms the story?

The climax of the film is a big highlight and has been designed well by director Sushanth Reddy. Megha Akash, who plays the the female lead does quite well. She had a strong role and did so well in all the emotional scenes.

Adith Arun is one of the highlights of the film with his natural acting. He comes at a key point and lifts the film. He was very good in all the emotional scenes. Arjun Somayajulu was just about okay in his role.

Pavitra Lokesh who played the role of a mother was also good in her role. Some college based scenes look good and have been designed well.

Arjun and Megha’s love track does not have a strong conflict point. The scenes between Megha and Adith are decent but they are dragged for no reason.

One of the biggest drawbacks of the film is the slow pace. This haunts the film in a big way. Though scenes wise things look good, the lag in narration gets dull.

Music of the film is decent and the songs have been shot well. The production values of the film are pretty good and the camerawork is neat as the visuals are impressive. Editing is pretty ordinary and some scenes in the first half could have been chopped off.

Coming to the director Sushanth Reddy, he has done a passable job with the film. His narration is pretty good in many scenes but if he would have added more drama and made the film at a fast pace things would have been different.

On the whole, Dear Megha is a feel good romantic drama with a good premise. The performances are good but the slow pace disappointes a bit. If you love serious dramas and ignore the routine storyline, this film has some breezy moments and can be given a shot this weekend.