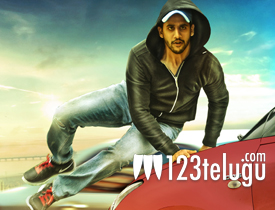 Chandu(Naga Chaitanya) is a small time crook who cheats everyone and earns money for his sister’s education. One fine day, he accidentally comes across a bag full of cash which belongs to a dreaded gangster Manikyam (Posani) with whom he also shares a personal vendetta.

He steals the bag and uses the money for his personal problems. Twist in the tale arises when Manikyam kidnaps Chandu’s dad and sister and demands him to return the money. What will Chandu do now ? How will he lend back the huge amount to Manikyam ? and where does Kriti Sanon feature in all this set up ? That forms the rest of the story.

Twists and turns in the film have been executed quite well. Naga Chaitanya looks handsome and has improved a lot with his acting capabilities. He suits his role well and his chemistry with Kriti Sanon looks refreshing. The film has quite a lot of thrills which have been executed nicely. The chase scene in the climax looks cool and has been choreographed superbly.

Kriti Sanon looks gorgeous and has been used cleverly in the film. Brahmanandam is the major highlight during the last half an hour of the movie. His character elevates the film to a decent level and brings a lot of entertainment value. First half of the film moves quite breezily and has enough thrilling moments.

Posani is very good during the climax and so are his sidekicks. Production values of the film are pretty good and the way the story has been conceived is interesting. Ravi Babu is apt as a cunning police officer and brings a lot of depth to the film. Saptagiri is superb in his cameo.

This film has traces of Swamy Ra Ra and in many scenes and story set up reminds you of that film instantly. Second half gets bogged down completely until Brahmanandam makes an entry. Songs are yet another drawback of the film. None of the songs register in your mind and have been wasted in the film.

Interval bang is too simple and hurried up. Even though the thrills are good, they take too much of screen time. Certain logics are missing in the film and one can easily notice those defects. Dohchay has very less mass elements and might limit its reach mostly to A centers.

Dohchay is quite high on technical values. Camera work is brilliant and the way director Sudheer Varma conceptualizes the entire film looks good. As said earlier, music is the weakest point in the film. But Sunny M R impresses with his decent background score. Screenplay of the film is good and picks up during the climax.

Dialogues written are apt and suit the nature of the film. Coming to the director Sudheer Varma, one can easily feel that he is still in the hangover of Swamy Ra Ra, and chooses a fairly similar script. But he earns brownie points by adding some entertaining elements and raises the tempo during the end which is quite important for any film.

On the whole, Dohchay has some very stylish action sequences. An interesting premise, well executed first half and a hilarious last half an hour are huge assets. If you manage to sit through the predictable twenty minutes post interval and go in without any expectations, you will definitely enjoy this glossy action thriller.