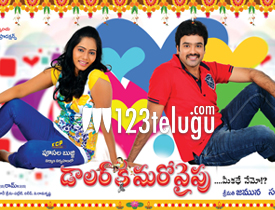 Dollar Ki Marovaipu is a message oriented film starring Yashwant and Mitra in lead roles. Veteran actor Nassar plays a crucial role in this film which has hit the screens today. Let’s see how it is.

Keshav (Nassar) is a small time employ who works in a private firm. His elder son Kalyan (Yashwant) who is an NRI from the US comes down to India and marries Satyabhama (Mitra) who hails from a selfish family.

As time passes by, some differences arise in Kalyan’s family because of his wife. How will Kalyan solve these differences ? Will he support his wife or his family ? That forms the rest of the story.

The basic plot is the major plus point of the film. It is an eye opener for all those who ignore their parents after settling down abroad. Senior actor Kaikala Satyanaryana’s guest role is a big attraction in the film.

Nassar’s performance is very impressive. Shivaji Raja does a good job and all his scenes with Nasser have come out extremely well. Few sentiment scenes in the first half are nice and Yashwant does a good job in his role.

Second half is a big let down. A number of unnecessary scenes take center stage and deviate the film from the main plot. Also, there is no clarity about the heroine’s character which gets quite complex. Many scenes have been dragged way too much and increase the run time.

Misplaced songs hamper the free flow of the film and tests the patience of the audience. There is no seriousness in certain crucial scenes which is a big setback for the film. The necessary emotions which are a must in movies like these are not executed properly.

The basic story line is OK but the director fails to make an impact with his narration. Screenplay is bad and the dialogues written are also not up to the mark. Cinematography by Veera is average. Music and background score by Kamal Kumar is disappointing. Editing by Nandamuri is average as many scenes could have been chopped off. Production values are just about OK.

On the whole, Dollar Ki Marovaipu fails to impress completely. The basic story line and impressive performances by Nassar and Shivaji Raja are the only attractions in the film. Lack of basic entertainment and clarity in emotions makes this film a disappointing affair and be ignored completely.