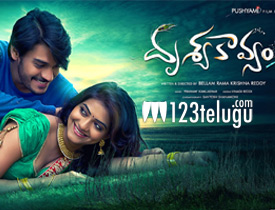 Horror is the new found love for Telugu audiences these days. Following this successful trend, a horror film titled Drusya Kavyam has hit the screens today. Let’s see if the film succeeded in justifying its title.

Akhil (Ram Karthik) and Abhinaya (Kashmira Kulkarni) marry each other after falling in love during their college days. The happy couple also have a daughter named Ananya. Tragedy strikes the family as Akhil dies in a car accident on his way to the airport.

Interesting aspect is that even after his death, Akhil continues to communicate with his family members through phone. How come a dead person talks to his family on phone? Is there a supernatural effect to this story ? To know answers to these questions, watch this film on the big screen.

The major plus point in Drusya Kavyam is the emotional scenes between the father and daughter. The entire drama revolves around these two characters which is wrapped up with a ‘No end for feelings’ message. The scenes that unfold during pre-interval offer a decent thrill. The pre-climax scenes have been executed well.

Ram Karthik has good screen presence. Kashmira has good looks and even her acting skills are appreciable. Madhu plays a crucial role in the film’s narrative. Child artiste Ananya performs quite well. The film’s second half has some well executed scenes.

The film mainly suffers from an incoherent script and screenplay which were written out of a wafer thin plot. The film gains its pace only during the second half but sadly, the audience are bored to death by then.

Except for the father-daughter scenes, there are hardly any interesting episodes in the first half. The second half loses its track after the interval and songs act as the major speed breakers to the narrative.

Yet another major drawback is the film’s abrupt and confusing climax. The makers claim to reveal the actual suspense in the sequel, Drusyakavyam 2 which is quite odd. The love track shot on the lead couple, college scenes and Prudhvi’s episode appear silly and boring.

Writer-director Ramakrishna Reddy’s story is incoherent. Even though the basic emotional drama looks promising, a largely confusing narrative fails the director’s efforts except for one scene where the suspense is revealed.

Pranam Kamalakar’s music is decent and two songs impress particularly. Rest of the songs and background score leave a lot to be desired. Santosh’s cinematography is quite impressive and adds to the mood. Nagireddy’s editing is uneven. The production values are surprisingly good.

Overall, Drusyakavyam is an interesting blend of horror and family drama. However, the film fails due to lack of a riveting horror elements, incoherent story and screenplay. Illogical scenes and an abrupt climax leave the audience dissatisfied in the end. Horror film lovers can try this film out but the rest can pick something else this weekend.