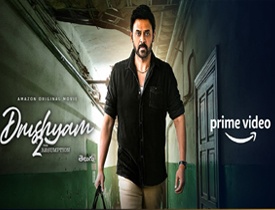 Drushyam starring Venkatesh was a huge hit at the box office. Now, the makers are ready with the sequel titled Drushyam 2 which has been released on Amazon Prime. Let’s see how it is.

The story starts where the first part ended. Ram Babu(Venkatesh) dumps the body of Varun(Nadia’s son) under a police station’s floor and comes unscratched in the murder case. Six years pass by and Varun’s parents are still dying to know who killed their son. They hire a superior cop(Sampath) who collects more evidence against Ram Babu and sets up his arrest. How does Ram Babu saves his family once again and gets out of a deadly situation forms the story?

Venkatesh starts where he left off in the first part. He shows the same intensity, pain, and tension that his character goes through several times. The star hero emotes superbly with his eyes and keeps the audience hooked with his performance. Meena gets good screen space this time and plays her supporting role perfectly.

Naresh and Nadia do a good job in the sequel as well but it is Sampath Raj who plays the rough cop impressively. His body language and expressions suit the mood of the investigative film well. Satyam Rajesh gets a big role and he is quite impressive.

The young actors who played Venky’s daughters also did well in their respective roles. The second half is where all the action begins. There is no dull moment during this time as the overlapping screenplay and the way twists are revealed are superb.

Like the first part, the emotional angle in the film is also quite high in Dirshyam 2. The climax and its justification are well thought of by the director. The mood of the film is held well by the gritty visuals.

The film starts on a slow note and things are unleashed at a slow pace. This aspect might feel boring to a few but even the characters introduced during the first half have a purpose at the end.

Drishyam 2 surely lives up to the expectations but the thrills that the first part had, are missing a bit in the sequel. As you know that Venkatesh’s character will come out innocent, the suspense factor gets diluted in a few areas.

Music by Anil Johnson is impressive but his soothing BGM was even more effective. The camera work needs a special mention as the crime and cop setup are shown effective. Dialogues by R Samala are pretty good and add depth to the film. The screenplay by Jeethu Joseph is quite gripping. The production design is amazing as the interval and climax twists are handled well.

Coming to the director Jeetu Joseph, he has done a very good job with the sequel. He keeps things quite contemporary and realistic in the sequel. The manner in which he showcases the investigation in a detailed manner without taking any cinematic liberties is also good. More than anything, the manner in which he ends the climax is also thought of well.

On the whole, Drushyam 2 surely lives up to the expectations. The sequel has solid performances, good twists, and crisp narration. Barring the slightly slow first half, this film ends as a clean and gripping family drama that can be watched by one and all this weekend.