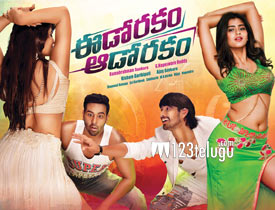 Young heroes, Manchu Vishnu and Raj Tharun have teamed up for a hilarious entertainer titled Edorakam Adorakam. The film which also stars Sonarika and Hebah Patel has hit the screens today. Let’s see how it turns out to be.

Arjun(Vishnu) is a happy go lucky youth who marries Neelaveni(Sonarika) without the consent of his father(Rajendra Prasad). Twist in the tale arises when Neelaveni decides to move away from her brother(Abhimanyu Singh) and rents the upper portion of Arjun’s own house without his knowledge.

Left with no choice, Arjun introduces his best friend Ashwin(Raj Tharun) as Neelaveni’s husband to his family. Rest of the story is as how both Arjun and Ashwin manage this huge confusion and where does Hebah Patel feature in this entire set up.

Story of the film is quite good and has scope for ample amounts of comedy. Rajendra Prasad is the highlight of the film as his character has been executed in a superb way. If not for the veteran actor’s expressions and comedy timing, the film would have gone for a toss.

Vishnu Manchu looks handsome and does his job supremely well. He does not go overboard and stays true to his character and carries the proceedings entertainingly. Raj Tharun plays his supporting role well and goes with the flow of the film. All his scenes with Posani evoke good laughs.

Though this film is a typical commercial flick, certain liberties that the team have taken go a bit over board. Even though Sonarika does well, she looks misfit in her homely role and a better heroine could have done wonders. Hebah Patel does not have much to do in the film and looks weird.

After an interesting interval bang, the way the twist and the second half kicks off lack depth. The film looses its steam during the second half as some unnecessary scenes and loud comedy takes center stage. The adult comedy in certain scenes goes out of hand.

Raj Tharun looks a bit subdued in his role and his character could have been elevated a bit more. There is no proper emotion in most of the proceedings. The climax is stretched way too much and gets over the top.

Sai Karthik’s music and background score is pretty decent. Dialogues are funny and so were the lyrics. Editing is sleek but the climax could have been easily edited in many areas. Camera work and production values are decent as the film looks quite good on screen.

Coming to the director G Nageswara Reddy, the way he has set the remake in Telugu nativity is interesting. His sole aim was to entertain the audience through a lot of confusion comedy and he succeeds most of the time. Though he goes off board certain times with some over the top silly comedy, he manages to narrate the film well.

Edorakam Adorakam is a film which will attract the B and C centers big time. Even though the film gets over the top at times and defies logic in many areas, it has some very entertaining elements which will go well with many. If you are looking for some sheer time pass and want to have a good time this weekend, try this film out and you will be decently entertained.