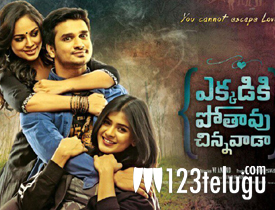 After a brief gap, young hero Nikhil is back with yet another interesting project Ekkadiki Potavu Chinnavada. The horror comedy has hit the screens amidst the currency ban and lets see whether it forces the audience to spend their valuable money to watch the film.

Arjun(Nikhil) is a visual effect supervisor with a bad love failure. One fine day, he takes his friend(Vennela Kishore) for treatment as the latter is possessed by an evil spirit. There he meets Nithya(Hebah Patel) and falls in love with her.

The twist in the tale arises when Arjun comes to know that Hebah is also possessed and someone inside her body is making her do all these things. Things become ever worst for Arjun when yet another character called Amala(Nanditha Swetha) approaches him as the one who is behind all this.

What is all this confusion ? Who is this Amala ? Why is she behind Arjun ? Is there a back story behind all this ? To know the answers, you need to watch the film on the big screen.

The story of the film is quite interesting and the way a spirit’s love for a common man has been executed well. Nikhil is a perfect fit for the film and suits his innocent role completely. The young hero has matured with his performance and should be credited for accepting a film which is story oriented and has importance for heroines.

The last half an hour of the first half is very gripping and ends with a superb interval twist. Nanditha Swetha does a superb job as the spirit as all her expressions and body language elevate the film quite well. Post the interval, the comedy scenes are executed well and full credit should go to Satya and Vennela Kishore who evoke good laughs.

Hebah Patel is decent in her role. The film has some very good moments throughout and the second half is filled with some decent moments with the entry of a special heroine and her love track. The twists that are showcased during this time are quite interesting.

The film needs serious editing as at least 15 minutes can be chopped off. The Kerala episode and some comedy that is generated has a huge lag and slows the tempo of the film big time.

Ekkadiki Potavu Chinnavada has a roller coaster kind of a feel. There are certain places where the film gets very entertaining and at the same time some scenes bog down the film completely. The director takes his own sweet time to establish the story and this slows down the film.

The production values of the film are superb and the decent camera work only enhances the proceedings. The art department should be credited for doing a good job as the priests and their set up is shown quite well. Music by Shekhar Chanda should have been a lot better as there was a lot of scope for it. But his background score is impressive and helps the proceedings.

Coming to the director Anand, he has done a pretty good job with the film. His story line is interesting and makes up for an interesting watch with some good twists and turns. Had he narrated the Kerala episode in a more entertaining way and reduced the run time, the impact would have been a lot better.

Nikhil has earned himself an image of doing some different films and it is once again proved with Ekkadiki Potavu Chinnavada. The film is really different from the regular horror comedies and has some very interesting moments to watch out for. Decent comedy and some unexpected twists are major assets for this film. If you ignore some boring moments during the initial part of the first half, this film makes up for a decent watch this weekend.