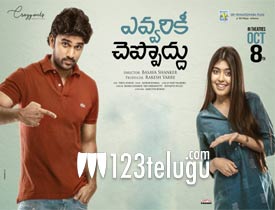 Top producer Dil Raj extended support to yet another small film titled, Evvarikee Cheppoddu. Directed by Basava Shanker, the film has hit the screens today as a Dussehra special. Let’s check whether it impresses us or not.

Hari (Rakesh Varre), who has a different approach towards life falls for a girl called Harathi(Gargeyi Yellapragada). Eventually, he tries to impress her and within no time, love blooms between them. But the main conflict in their love story raises because of the heroine’s father who has a hardcore caste feeling issue with the boy. What will the couple do now? How will they overcome their hurdles? That forms the rest of the story.

The love story between the lead pair has been projected in a decent manner. Rakesh Varre is good in the given role and performed to the best of his capability. Heroine Gargeyi Yellapragada is one of the main highlights of the film as she impresses with her settled and natural acting. Her acting during the pre-climax emotional scene is superb and brings a lot of weight to the film.

The actor named Vamsi Nakkanti, who portrayed the heroine’s father role is impressive and did his character quite convincingly. A few situational fun scenes which come during the second half evoke good laughs. The love scenes between the lead pair have been written well. Also, the way the director has etched the heroine’s role looks wonderful.

Though the film has a decent premise, somewhere the narration lacks the spark which drops the pace at regular intervals. Scenes related to the hero’s character and his instant ideas to get married to the heroine have not been established in a proper manner. A few love scenes featuring the lead pair in the first half have been dragged a bit more.

The way the hero confuses the heroine’s father by creating a caste tree concept is weird and should have been elaborated in an effective manner. As the climax approaches, the audience feels that things are wrapped up on a quick note without proper drama between the lead roles. The conflict during this time is not that strong.

There are many forced emotions in the second half and these scenes take the film down and make it slow until the pre-climax. After a point, the story becomes quite predictable and has nothing new to showcase.

Director Basava Shanker’s intention and his idea to expose the caste difficulties in a love story are nice but he should have focused more on the execution part for better output. But his dialogues are good and relatable with the youth audience. The cinematography is decent as the film was presented neatly. Editing work is good as the film is hardly 2 hours 10 minutes. Music is nice as two montage songs that come between the lead pair are appearing on the screen. Production values for this low-budget film are largely good.

On the whole, Evvarikee Cheppoddu is a message-oriented love story that impresses in bits and pieces. The chemistry between the lead pair and a few romantic scenes related to them are showcased well. But on the flip side, lack of engaging screenplay and the predictable storyline make it a strictly passable fare at the box office.