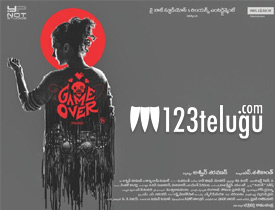 Taapsee’s Game Over has created a good hype even before it’s release. The psychological thriller has hit the screens today and lets see whether it has anything interesting in store for us or not.

Swapna(Taapsee) is a video gaming developer who works mostly from home. Her life changes upside down the moment she gets a tattoo done on her hand. She starts getting weird dreams and also is targeted by some wicked invaders at her home who try to kill her. Who are these people? What are the dreams all about? and How will Taapsee fight her internal and external problems? To know all this, you have to watch the film on the big screen.

The writing of the film is good as the script has different layers. Sometimes it feels like you are watching a horror film and then proceedings have a lot of suspense and create good thrills especially in the second half.

Game Over primarily clicks because of the screen presence and performance of Taapsee. Off late, Taapsee has turned into a powerhouse performer and she does it once again in this film. Taapsee’s expressions and the manner in which she showcases her helplessness in crunch scenes is top notch in the film. She is wheel chair bound most of the time in the film and gives her best in every scene.

The second half is where the actual action happens. The thrills showcased, the suspence created and performances during this time are very good. The various twists that come during this time have been executed well.

One cannot say that it is a drawback but the entire first half is way too slow and takes forever to get to the actual point. Even though the film’s run time is short, this part looks long and has not many thrills or suspense filled episodes.

Yet another drawback of the film is that it has an intelligent screenplay which is a bit confusing for the common man. The house is invaded by strangers and their whereabouts and connection to the plot should have been explained in detail.

A lot is left for the intelligence of the audience and this can be a bit stressful and confusing for the regular audience.

Ron Yohann’s music score for the film is impressive. His work especially in the second half lifts the film to another level. The film has a neat concept and is made with good production values. Art design and the manner in which the house set up is shown looks good. Editing is good but first half could have been trimmed even more.

Coming to the director Ashwin Saravanan, he has done a decent job with the film. He takes his own time to establish the story and accelerates his narration in the second half. His writing is good but if he would have made the plot even more simple and understandable for every section of the audience things would have been even better. The situation is such that there will be a lot of doubts in the minds of the audience which should have been explained well.

One the whole, Game Over is a psychological thriller which gets interesting in the second half. Taapsee leads from the front with her standout performance. A slow first half and confusing narration in certain places are drawbacks. This film is clearly for the multiplex audience as the common man may might find things slightly confusing. If you manage to sit through the dull first half, things get really interesting in this thriller and make up for a decent watch this weekend.