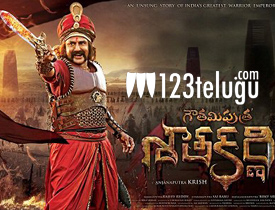 Now that Khaidi No 150 has released yesterday, the entire focus of Sankranthi releases has shifted towards Balakrishna’s Gautamiputra Satakarni. The magnum opus which is directed by Krish has hit the screens all over today. Let’s see how it turns out to be.

The story of the film is based on Gautamiputra Satakarni(Balakrishna), one of the most powerful kings who belonged to the Satavahana dynasty in India. Even though there are many stories about how he ruled India, Krish showcases how he went on to win two crucial kingdoms ruled by Indian kings and also defeated the mighty Greeks who invaded India during the good old ancient days.

There is no doubt in saying that no one other than Nandamuri Balakrishna would have suited Satakarni’s role as the star hero did. Right from Balayya’s screen presence to his poise as the striking emperor, everything looks top notch. He looks regal as Satakarni and works extremely hard in all the war scenes. Balayya’s dialogue delivery is in top form during war scenes and will surely bring goosebumps to fans all over.

Shreya is the surprise package of the film as she gives her career best performance as Vasistha Devi. Shreya looks gorgeous as the princess and emotes supremely well throughout the film. The interval bang and the war scenes that come during the last part of the first half are very good. Hema Malini plays her supporting role to the T and brings a dignity to the film.

Credit should go to Krish for bringing life into the story of an unsung king and narrating it in a hard hitting way. Production values are top notch as Krish amazes everyone by opting for less CG and keeping things real. His story is very powerful and he as a director does not vary much in his narration.

Even though many will feel that the short run time is a boon to the film, a story like this should have been told even more elaborately. The makers should have spent more time in establishing who Satakarni actually was. The same goes for the war scenes as well. In spite of being well designed, too much of time is spent on them as they eat away most of the run time.

Krish, who is known to have some strong drama in his film disappoints a bit with this film. Except for Shreya and Balakrishnan’s track rest of the film has less drama. The supporting cast looks weak and some better actors would have brought a lot of depth to the film. Balakrishna’s makeup in certain scenes looks very odd.

Gautamiputra Satakarni has some top class technical values. As said earlier, the film has superb visuals and credit should completely go to the production design department for giving the film a grand look. Once again, Sai Madhav Burra shines as his dialogues will be remembered for a long time in Tollywood. The way he penned dialogues for Balakrishna which elevate the greatness about Telugu lineage will bring applause in the theatres. Music by Chittaranjan Bhatt is average but the background score is impressive.

The costumes used, armory chose and all the various props used for the war look realistic and prove that a lot of detailing has gone into the film. Editing is slick but the war scenes could have been trimmed a bit. Screenplay by Krish is pretty neat. The way he has added crunch scenes like the importance of mother and the love for Telugu people in the narrative showcases his talent.

Coming to Krish as a director, he has done a stupendous job and will go down in history for bringing life into our own historical Telugu king which many did not know much. Kudos to him for showcasing the film in such a grand manner with whatever limited budget and resources he had. Time and again, he has proved himself by making different films and Satakarni will be on the top of his best works till date. Also, the way he has showcased Balayya will be loved by the hero’s fans to no extent.

With Kanche, Krish created many paths and gave Telugu cinema a new direction. He continues his astonishing work by narrating a hard hitting and entertaining story of an unsung king in a thumping manner. Films like these come very rarely and icing on the cake is the presence of Balakrishna who single-handedly dominates the proceedings with his towering performance. If you ignore the lack of emotions during the second half, well-executed war scenes and grand visuals make this historical extravaganza a must watch for every Telugu film lover.