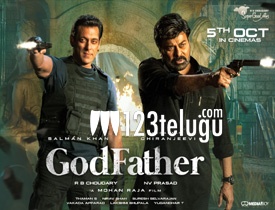 Post the debacle of Acharya, Chiranjeevi has taken a safe route and has remade a Malayalam hit Lucifer. Titled Godfather, this film has hit the screens today. Let’s see how it is.

The film starts with the death of a state CM. This leaves the key post open and in line to take over as the CM are Jai(Satyadev) and Satya(Nayanthara) the son in law and daughter of the late CM. But in comes one more power house in the party, Brahma(Chiranjeevi) to stop all this from happening. The rest of the story is about the cat and mouse game of who becomes the CM of the state finally.

Godfather is the official remake of the Malayalam hit Lucifer but director Mohan Raja has made good changes to suit the sensibilities of the Telugu audience. Mohan Raja has stayed true to the story and narrated the film in an engaging manner.

The manner in which he has showcased Chiranjeevi is superb. All these years, we have seen Chiranjeevi in highly energetic roles but here in Godfather, he plays a mature politician and is very good. Chiranjeevi does not have many dialogues but he emotes superbly through his eyes. Though he does not dance or evoke comedy, his screen presence and settled performance will be loved by his fans.

Nayanthara plays a key role and brings a lot of depth to the film. But if there is one actor who steals the show it is none other than young hero Satyadev. He surprises you with his evil act and is a perfect enemy for Chiranjeevi. The manner in which Satyadev goes about his role is convincing and he impresses big time.

Murali Sharma gets a key role and he was impressive. The first half is filled with well written political moments which are well executed. Brahmaji, Sunil, Samutrakani do well in their roles.

The film has some really well written scenes. The jail episode between Chiranjeevi and Satyadev is executed superbly even though the megastar does not utter one dialogue.

Last but not the least, Salman Khan’s entry is perfectly timed into the narrative and gives the required mass moments for the fans. The climax fight, song and slow motion shots of Salman and Chiranjeevi are solid and end the film on a high.

Lucifer had a very engaging drama and when compared to it, things are a bit low in Godfather. The second half becomes slow as there is not much story to showcase. That is the reason a song breaks out at the pre-climax time.

Also, Chiranjeevi looks a bit stiff in a few scenes during the end of the movie. The emotions in the second could have been more stronger. Salman Khan’s role looks fancy but is not justified properly by the end.

Also, the proceedings are a bit predictable. Though Satyadev is good, some more padding should have been given to him to enhance the villain angle in the film.

Thaman is one more asset of the film as his BGM elevates the proceedings big time. The production design is very good and the colour tone used by the cameraman to showcase the political setup is amazing. Dialogues are decent and so was the editing part.

Coming to the director Mohan Raja, he is known as the remake specialist and he has done an impressive job with the film. He uses Chiranjeevi’s grace superbly and lets his eyes emote. The changes he makes or the mass elements he has added with Salman are good.

The best part of the film is that Mohan Raja does not force any over the top scenes or comedy and narrates the political thriller in a proper way. When you think the film is getting simple towards the end, he brings in Salman and ends the film on a high.

On the whole, Godfather is an impressive political thriller narrated in a sensible manner. A new age and mature Chiranjeevi, solid performance by Satyadev and Nayanthara and a fun cameo by Salman Khan are basic assets of the film. When compared to the original Lucifer, drama is missing a bit but that does not stop the fans and masses having a fun ride this Dussehra as the boss is back.