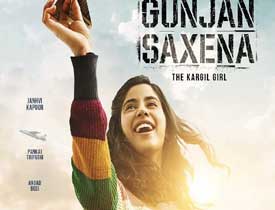 Gunjan Saxena is a film that has been awaited for a long time as it is based on the life of Indian Air Force Pilot Gunjan Saxena, who fought the Kargil War for India. The biopic is now out on Netflix and let’s see how it turns out to be.

Gunja Saxena(Janhvi Kapoor) is a very bright student in school. Right from her teenage, she wants to become a pilot. Her mother and brother are strictly against her idea but Gunjan’s father(Anup Saxena) encourages her to take up flying. She decides to become a pilot but she cannot afford it. So, her father suggests Gunjan join the Indian Air Force. Gunjan passes all tests and starts her journey as an Indian pilot. But through her training, she is looked down upon and is not taken seriously The rest of the story is as to how Gunjan proves everyone wrong and even fights the Kargil war for the country.

The film is more about the struggle of Gunjan Saxena and how she fought hard to become a daring Indian pilot. There is no exaggeration in this fact and the film showcases the various insults and struggles the young pilot goes through in life. Angad Bedi is superb as the tension-filled brother of Gunjan.

The heart of the film is Pankaj Tripathi who is amazing in his role as Gunjan’s dad. The calmness he brings to the film and his immense emotional bond with his daughter has been emoted superbly by Pankaj Tripathi. He is a proven actor and there is no melodrama in his performance and he is top-notch and the best part of the film.

Janhvi Kapoor gets the most difficult role of her life so far and does her best. She is amazing in all her scenes with her dad and does well to play the real-life pilot. Though her performance looks jaded in the beginning, by the end of the film, she is at ease and is amazing in the climax.

Even though the film is just one hour 54 minutes long, it feels a bit dragged. Too much time is spent on the childhood scenes of Gunjan Saxena. All those who think that the film is more about how Gunjan Saxena fought the Kargil war, they will be disappointed as this part only forms the climax of the film. Also, the Indian air force pilots are showcased as those who never encourage women pilots. The film is filled with feminist scenes and this might not go well with a few. A few scenes are also predictable at the beginning of the film.

Production values of the film are top-notch as all the chopper scenes are showcased in a deadly manner. Heavy-duty VFX is used but not one scene looks artificial. The film has solid camera work and production values are top-notch. Dialogues are amazing and those written for Pankaj Tripathi are quite emotional. The production design, music score, and BGM sit perfectly in the film.

Coming to the director Saran Sharma, he has done a decent job with the biopic. He does not beat around the bush and showcases too much of fiction as well. There are scenes where Gunjan says that she has come to the Indian air force only to fly and not because of her love for the country. With such dialogues, he stays true to the story and shows the film in a more emotional note.

On the whole, Gunjan Saxena is an emotional biopic of India’s bravest Air Force Pilot. The film is based on the struggles faced by Gunjan Saxena and showcases what she went through mentally to achieve big in life. Though the narration is predictable and the pace is slow, emotional moments and good performances make this film a decent watch.