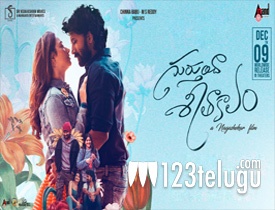 Satyadev and Tamannah’s Gurtunda Seetakalam has been in the making for a long time now. The romantic drama has finally hit the screens today. Let’s see how it is.

Dev(Satyadev) is a middle-class guy who falls in love with Ammu(Kavya Shetty). But his love story ends in a bad manner. Dev then gets married to Nidhi(Tamannah) and starts a happy life. But a sudden twist changes the life of the couple. What is that twist and how does the couple overcome it forms the rest of the story.

Gurtunda Seetakalam is the official remake of the Kannada hit Love Mocktail and has been set up in a decent manner for the Telugu audience. Megha Akash plays the anchor’s role and is decent in her character.

Tamannah gets a makeover and she is neat in her emotional character. Tamannah has done quite well in the last ten minutes of the film. Priyadarshi is neat as a hero’s friend and evokes comedy. Suhasini was okay in her cameo.

Last but not the least, if Gurtunda Seetakalam ends up as watchable, it is only because of hero Satyadev. He carries the film on his shoulders and gives a very good performance. This role gave him so many shades to perform and Satyadev nails it.

One of the biggest drawbacks of the film is the lack of novelty factor in the film. Right from the story to the scenes, you might have seen them in endless films to date. Satydev needs to select his stories carefully as there is nothing exciting that has been showcased in a film like Gurtunda Seetakalam.

The film has a very dark theme and does not look fresh. A few college episodes of Satyadev are okay but the rest of the romance is very dull. There is absolutely no conflict point in the film and it runs out of steam in the second half. Satyadev and Tamannah do not share good chemistry at all.

Tamannah plays the main lead and she is introduced quite late into the proceedings. Also, the way she enters Satyadev’s life is shown in a rushed manner. The hero goes through a bad breakup and their friends set him up with Tamannah. In just the first meeting itself, he proposes marriage to her. There are so many such silly scenes in the film.

The end part where the key twist is told has so much scope to elevate the drama but the director fails to add any depth and the proceedings look forced as the lead pair just sleepwalk in their roles. Also, Satyadev needs to change his routine and boring look.

Music by Kaala Bhairava is strictly okay as none of the songs register on the screen. But his BGM was good. The camera work, locations, and production values are good. Dialogues are good.

Coming to the director Nagasekhar, he has done a pretty disappointing job with the film. He has not used actors like Satyadev and Tamannah to the fullest and narrated the film on a very dull note. There is no depth in the emotions, romance, or tragedy showcased in the end making this film a dead rubber.

On the whole, Gurtunda Seetakalam is an outdated romantic drama that has nothing new to showcase. Tamannah and Satyadev try hard to salvage this film with their performances but the shoddy screenplay and narration lack depth hereby making this film a yawn fest this weekend. Ignore it.