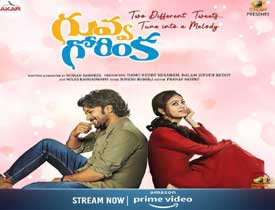 Continuing the trend of reviewing shows and films on OTT, today, a Telugu film called Guvva Gorinka has hit the small screens. The film is available on Amazon Prime and let’s see how it is.

Sadanand(Satyadev) is a mechanical engineer who wants to invent a soundless vehicle. On the other hand, Siresha(Priya Lal) is a musician who comes to Hyderabad to do her Masters’s. They live in adjoining flats and somehow stumble upon each other by talking from their homes. They don’t see each other but keep talking for a long time. This casual conversation develops into friendship and eventually, they fall in love. What happened to them in the course of time forms the story of the film.

In form, Satyadev looks good in this film. Though his role looks a bit silly to look at, the talented hero makes things watchable with his sincere performance. His dialogue delivery and some conversations with the heroine Priya are good. Satyadev was good in the climax part of the film.

Coming to the heroine Priya Lal, though she looks in discomfort at the beginning of the film, she plays her part well. Her role is nicely designed and gives Priya a good scope to perform. Priyadarshi evokes few laughs in his role. The last ten minutes of the film have some interesting drama.

One of the biggest drawbacks of the film is the novelty factor which is missing in the film. For close to one hour absolutely nothing happens in the film. The conflict point is not at all brought into the proceedings until the first half which tests your patience completely. The main characters talking to each other through their closed walls in today’s time also looks silly.

Once the romance starts, there are also no strong points for each other to fall in love. Things happen just for the sake of it. Apart from this, the various comedy tracks in the film are way too irritating. Rahul Ramakrishna and his garage comedy is a big obstacle to the film. Though Priyadarshi does well, his comedy track also looks silly.

Things happen only in the last ten minutes but by then, you are exhausted and lose interest. The film also defies logic in many areas. The subplots of a live-in couple also bore you. The writing is water-thin and not one emotion works making you think why are the people are not meeting each other ever after they have no restrictions in life.

Music by Suresh Bobbili is decent and the BGM composed for scenes in the second half is impressive. The art direction needs a special mention as the set up looks good. Dialogues are neat and so were the lyrics. Even though the film is under two hours, editing is pathetic as many scenes could have been chopped off.

Coming to Mohan Bammidi, he has done a pretty disappointing job with the film. Firstly, his story is routine and also silly. His intention behind love and how the main lead fall for each other irrespective of their background is good. But his execution defies looks silly. He does not have anything to do in the first one hour and when he starts making sense, the film is over. The emotions between the lead pair are completely missing as the story idea is of the ’80s.

On the whole, Guvva Gorinka is a rom-com that is filled with silly and over the top scenes. Lack of basic conflict points, unrelatable emotions, and logical issues are huge drawbacks. Satyadev is the only solace of the film but he too should forget this film like a bad dream and move on as there is nothing worth raving about in this predictable and boring love story.