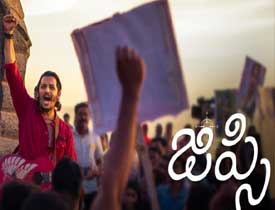 So, continuing the series of reviewing movies and shows during the lockdown period, our today’s pick is the Telugu film Gypsy. The film is available on AHA and let’s see how it is.

Gypsy(Jiva) is the son of a Hindu-Muslim couple who is killed in a terrorist attack. Later, he grows up under the wings of a nomadic musician who teaches him to live carefree in life. The musician during his last stages asks Gypsy to go find his eternal love which will solve his purpose in life. Gypsy along with his horse reaches Nagore and falls in love with Waheeda(Natasha Singh). But due to a crazy incident, the couple gets separated sadly. The rest of the story is as to how the couple reunites back in the backdrop of religious politics.

Jiva gets a crazy makeover from his previous films and does supremely well in the film. Jiva showcased superb body language and brings a new dimension to the film with his looks and dialogues. He was especially good at all the tragic scenes in the film.

Natasha Singh also gets a very good role in the film. She as a Muslim girl does supremely well. She was very good in all the romantic scenes and shared good chemistry with Jiva through the movie. The songs are a major bonus as they have been shot supremely well. They look super cool. The other supporting cast has also done well along with Siva Kumar,

The way the love story gets hampered through external factors is also not that great. There should have been more scenes that showcase this aspect. In a way, you can say that the premise had a solid chance for the director to write more engaging scenes but he missed out on it completely and narrated a routine story.

What strikes you the most in Gypsy is its camera work. The film has some great visuals that have been shot well. The production values are decent and so was the Telugu dubbing. As said earlier, music was good and so was the background score. The editing was just about okay and the screenplay was disappointing especially in the second half.

Coming to the director Raju Murugan, he has chosen a decent story and even starts off well. His characters are realistic but after a while, the film becomes a routine love story and bores the audience with unnecessary emotions that do not click.

On the whole, Gypsy is a romantic drama that has a decent premise. But poor execution of the love story, fake emotions, and logical errors kill the film completely. Jiva does well in his act but that is not enough for the audience to give this boring film a shot during this lockdown period. Skip it.