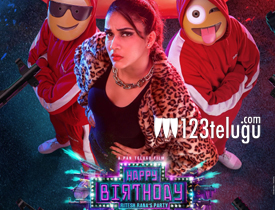 Happy Birthday is a film that has been promoted a lot in the last few days. Starring Lavanya Tripathi as the main lead, this film has hit the screens today. Let’s see how it.

The film is set in an imaginary world where guns are publicly allowed in India. At such a time, Happy(Lavanya Tripathi) goes to Posh Pub for a surprise party. But a series of events and crazy characters related to a diamond robbery take over. What is the whole setup? Who are these crazy people? and what’s Happy’s story? That forms the crux of the story.

Lavanya Tripathi gets a major role and will surprise you with her performance. She is wacky, stylish, and gets the scope to go all out in her crazy avatar which also has a special surprise. Lavanya also looks gorgeous in the film. Gundu Sudharshan gets a good role and his comic timing is quite nice.

Vennela Kishore is funny in his role and the gay angle is evoked well by the noted comedian. The first half has some decent moments filled with memes and the satirical comedy looks good. A fun scene between Vennela Kishore and Satya is hilarious in the second half.

Comedian Satya is a crowd puller and he is superb in his role. His body language, comic timing, and dialogue delivery are top-notch in the film. If not for him, the film would have been bland and silly. The interval bang has established well by the director.

When you make over-the-top comedies, the run time should be crisp and the story should be wrapped up in a jiffy. Happy Birthday is sadly over two and half hours long and takes forever to finish. There are so many scenes that test the patience of the audience.

The trailer showcased that the movie is all about gun culture but that aspect is pushed aside and it is used just as a backdrop of the story. The film needs serious editing as scenes in Lavanya’s track goes on forever.

The film had solid scope for comedy and director Ritesh also used memes and funny social media references quite well. But his narration lacks clarity and the nonlinear screenplay does not work in the favor of the film creating a boring effect.

Though characters are written and established well, there is no hilarious fun generated through them. The makers kept telling us that the film is set in an unreal situation and one should not find logic in it. But still, these unrealistic situations go over the top and confuse the audience.

The production values of the film are pretty good as the Ritz hotel and westernized look created for the film are amazing. Kaala Bhairava’s BGM is not that great in the first half but is amazing in the second. The dialogues are super fun especially written for Gundu Sudharshan. Editing is pathetic as close to twenty minutes can be easily cropped off in the film. Lavanya has been designed quite well in the film.

Coming to the director Ritesh Rana, this is his second film after Mathu Vadhalara and he has done a dull job with the film. His writing, backdrop, character graphs, and twist, everything is decent, but execution-wise, he has failed to deliver. He adds so many unnecessary scenes that bore the audience. There is not a single episode where you die laughing. In a way, he has missed a big opportunity to make a laugh riot with his lengthy runtime and boring screenplay.

On the whole, Happy Birthday does not live up to the hype created. Though it has good scope for comedy, the fun generated is limited. Vennela Kishore and Satya save the show with their hilarious acts but the rest of the film is over the top and drags on and on.