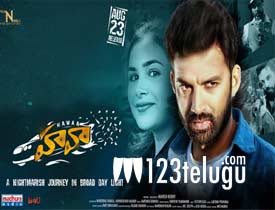 Continuing the trend of low budget films, yet another movie by name Hawaa has released today. Touted to be a crime thriller, let’s see how the film turns out to be.

The film is completely based in Sydney. Charlie(Chaitanya Madadi) loses his parents and gets into small-time crimes to make it big in life. Fed up with his small earnings, he decides to bag a jackpot by betting on a dark horse in the Australian race. But to his bad luck, there are a number of criminals who are trying out different things for their own survival. to his bad luck, Charlie gets entangled in all this and a chase is on to escape from this deadly. How Charlie comes out of this mess is the rest of the story.

As the film is entirely shot in Sydney, the production values of the film look good. The main lead, Chaitanya Madadi is decent in his role and carries the film on his shoulders. Heroine Divi Prasanna looks beautiful and does well in her small role.

The climax of the film is handled well. The interrelation between the stories has been written well and makes sense only in the second half. Camera work in the film is very good as the plush locations in Sydney have been showcased well.

One of the biggest drawbacks of the film is the screenplay. It is horrible and does not make any sense. The story has various subplots and to handle all of them, a gritty screenplay was needed which was completely missing in the film.

As all the actors in the film are mostly new, they ham to no extent and irritate the audience. The comedy showcased is cheap and silly to the core. The characters and their endings in the film have not been justified well.

The first half is a pain as things get sidetrack time and again. The second half makes some sense with the story unfolding slowly but this part is also narrated well.

As said earlier production values of the film are good. Music by Gifton Elias is decent and so was his background score. Editing is neat as the film has a crisp runtime. The film defies of logic and raises several doubts regarding the crime scenes in the film. Coming to the director Mahesh Reddy, he has done a poor job with the film. The basic emotion is missing in his direction as his narration lacks punch and clarity. The key twists have not been handled well and this makes things difficult for the audience.

On the whole, Hawaa is a very poorly made crime thriller which does not have a basic emotion and seriousness. The camerawork and visuals are good but the rest of the story and its execution is below par and makes for an irritating watch this weekend. Ignore it safely and look for something else interesting.