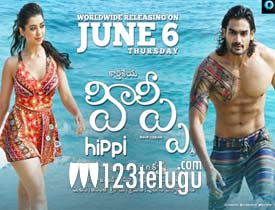 RX 100 fame Kartikeya is back with yet another youthful romantic drama, titled Hippi. Directed by TN Krishna, the film is out for public viewing today. Let’s see how it is.

Hippi Devadas (Kartikeya), who is already in a relationship with a girl named Sneha, falls for her close friend Amuktamalyada (Digangana Suryavanshi) and breaks up with the first girl. After a constant pursuit by Deva, Amuktamalyada finally says yes to his proposal. The actual story begins when they both get into a serious relationship. What sort of insecurities will the young couple face during this course of time? Will they continue their relationship and make it an everlasting one? To know this, you have to catch the film in theaters near you.

Hero Karthikeya’s makeover as a stylish and trendy youngster is good. He maintained a well-toned physique and surprises with his six-pack abs.

Heroine Digangana Suryavanshi is the show stealer. She impresses with her cute looks. Her screen presence and energetic performance bring depth to the proceedings to an extent.

It’s good to see JD Chakravarthy on the screen after a brief gap. He is okay in his role. Comedian Vennela Kishore evokes a few laughs with his spontaneous funny dialogues.

The main drawback of the film is that it lacks a proper flow in the narration. From the first scene itself, you get a feeling of watching yet another typical love story with unbearable narration.

The crucial drama and romance between the lead pair are not established in the right manner, as unnecessary arguments come your way all the time.

In an overview, though the film is a straight Telugu film, somewhere the proceedings make you feel as if you are watching a dubbing film.

Director TN Krishna’s main idea of making a love story set in contemporary times is good. But sadly, he forgot to update his narrative style. Right from the screenplay to the narration, the film is handled in an old fashion and hence the proceedings became predictable.

Editing by Praveen K. L is not up to the mark, as close to twenty minutes of the film can be easily chopped off. Cinematography by R. D. Rajasekhar is just about okay and could have been better. But he nicely captured Goa in two songs.

Music by Nivas K. Prasanna is decent, as two romantic numbers in the first half are good. His background score fails to create magic at the crucial juncture of the film. Production values by top producer Kalaipuli S. Thanu’s V Creations are top notch.

On the whole, Hippi is a stylish romantic film which fails to impress the audience. Hero Karthikeya and heroine Digangana take the lead and make the proceedings appealing, but abrupt narration with double meaning dialogues totally spoil the plot, making it a boring watch this weekend.