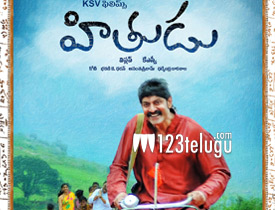 Off late, Jagapathi Babu has become an extraordinary character artist. This family hero’s latest flick is Hithudu which has him in the lead role. This emotional drama has hit the screens today and let’s now find out how the film turns out to be.

The story starts off in a backward village called Paderu. Sitaram ( Jagapathi Babu ) is an ex-naxalite who leaves his gang and sets up a school in Paderu to encourage education.

On the other hand, Abhilasha (Meera Nndan) is a happy go lucky girl who is quite brilliant in her studies. Seeing her talent, Sitaram takes up the responsibility of teaching her. One fine day, Abhilasha lands herself in huge trouble.

Citing these problems, Sitaram makes necessary arrangements and sends her off to another town for further studies. Rest of the story is as to how Sitaram manages to help Abhilasha complete her studies in spite of all these problems.

Plus points:
Jagapathi Babu did complete justice by showcasing good variations in his character which consists of three different shades. He uttered some powerful and meaningful dialogues effortlessly. Meera Nandan suits her character well. She delivers a splendid performance as a typical village girl.

Young director Viplav succeeded in conveying his agenda through some powerful dialogues which include meaningful human values. Benerjee was quite good as a naxalite.

Lack of necessary commercial elements is the major drawback. Even though the basic idea of the film is good, the director failed in his execution in most part of the film. So many sub plots which come in the middle of the movie creates huge confusion.

The screenplay is sluggish and is not interesting. After 10 minutes, the movie becomes quite predictable. The run time is quite long and all the songs pause the proceedings of the film. There is no clarity about the instant realization of the villagers.

Coming to the music, Koti’s background score is very good during the emotional scenes but none of his songs are good. Cinematographer Bharani has showcased the locales of Vizag in a splendid manner. Production values are good.

Editing of the film is very dull as the movie becomes quite long and gets dragged. Most part of the film could have been easily chopped off. Director Viplav has succeeded in extracting some good performances from the lead cast. Even though his concept is good, the execution is very bad.

Overall, Hitudu has some extraordinary performances and interesting story line complemented by some worthy dialogues. The film has an art film flavour completely and will not impress the regular audience. All those who like realistic films with a slow narration can try it. Rest can take it easy.