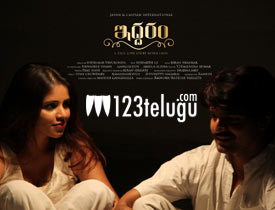 Continuing with the trend of low budget films, yet another romantic thriller which has hit the screens today is Iddaram. Directed by debutante Sudhakar Vinukonda, let’s see how this film turns out to be.

A group of orphans form a team and keep educating young couples about the side effects of early marriage and kids. One among them is Sanjeev(Ajay) who suddenly comes to know that his close friends are actually raping innocent girls amidst this good cause.

One fine day, the dreaded gang comes to know about Sanjeev and his girlfriend and start chasing them. A huge fight breaks out and Sanjeev gets badly injured in a car accident which also kills his girlfriend. Adding insult to injury, Sanjeev also looses his memory and becomes helpless.

This is the time when an unknown girl meets Sanjeev and trains him to take revenge on his friends. Who is this girl ? What does she have to do with Sanjeev ? How will an helpless Sajneev take his revenge ? That forms the rest of the story.

Concept of the film is quite unique and the way it is showcased during the start is also impressive. The way Sanjeev’s character is written and executed needs a special mention. Also, the manner with which hero takes revenge on the villains has been showcased nicely.

The dialogues, proceedings and some moments showcasing this concept during the first ten minutes looks gripping. The chemistry between the lead pair and all the confrontation scenes designed on them looks novel.

The main concept of the film which is to do good to the society is completely side tracked after a point. The personal vendetta and certain other unnecessary scenes become the crux of the film and dilute the concept and make the proceedings routine.

Once again, even during the second half, the way personal vendetta gets side track with a super natural effect lacks focus. As the actors are newcomers, their performance in crunch scenes lacks that necessary elevation and does not give the needed depth to the emotions.

Music by Kiran Shankar is okay. Editing is very bad and so was the screenplay. Production values are decent as the film is showcased in a decent light. Coming to the director Sudhakar Vinukonda, even though he had a decent concept, his writing is quite weak as many a times the film changes track from one plot to another which makes matters worse.

On the whole, Iddaram has neither romance or the required thrill which is a must for romantic thrillers. Weak writing, deviation from the plot and some pre-mature performances spoil the viewing experience big time. Except for intriguing chemistry between the lead pair, this film has nothing much to offer and can be left alone this weekend.