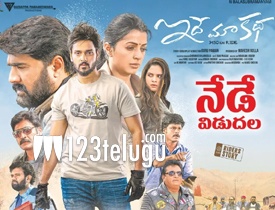 Idhe Maa Katha is a film that has been promoted a lot in the last few days. The film is out in the open and let’s see how it is.

The film is based on four key characters played by Srikanth, Bhumika, Tanya Hope, and Sumanth Ashwin. Each of them has a back story and meets each other unexpectedly on a road journey. How do their lives change from there and what kind of evolution does each character go through emotionally? That forms the rest of the story.

Next in line is Bhmika who had a good screen presence. Her look and character graph are quite neat. Sumanth Ashwin gets a lead role and is quite confident in his approach. He is quite active and carries the film on his shoulders.

The so-called road journey scenes have also been canned well and are highlighted by good camerawork. Also, the problems that the group faces in their road journey are also executed well.

Though it is not a drawback, the director Guru Pawan takes a lot of time to introduce the main characters and, this eats most of the time in the first half. If this aspect would have been handled well from the beginning onwards, things would have been even better.

Also, there was a good scope for the drama to be elevated between the four key characters but the makers failed to do so. After so much going on in the film, one would expect a better climax but the film has been ended on a simple basis.

Production values of the film are top-notch as the makers did not compromise on the taking and visuals. The camera work is amazing and so was the production design. The editing was decent and so were the dialogues. Coming to the director Guru Pawan, he has done an ok job with the film. If he would have elevated the emotional aspect more, things would have been even impressive.

On the whole, Idhe Maa Katha is a road journey film with a neat backdrop. The characters and their performances are good. But the lack of come emotional depth in the film dilutes the plot and makes this film just an okay watch this weekend.