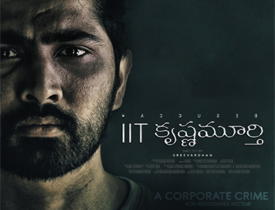 Continuing the trend of reviewing shows and films on OTT, today, a Telugu film called IIT Krishnamurthy has hit the small screens. The film is available on Amazon Prime and let’s see how it is.

Krishnamurthy (Prudhvi) comes to Hyderabad in search of his uncle. He lodges a police complaint but shockingly comes to know that his uncle is dead and was cremated by the cops themselves. Krishna does not believe this and continues to find the cause. He gets attacked multiple times and this is also the same time a big company fraud takes place. What is the connection between these two cases? What happened to Krishna’s uncle and What’s the back story? That forms the rest of the story.

The suspense factor that is revealed in the end is pretty good and has been handled well. The manner in which the suspense is built up with key scenes in the pre-climax was neat. Comedian Satya does a good job in his limited role. Theatre actor, Vinay Varma gets a key role and he does well as a cop. He is the best part of the film and is getting better with each film.

Maira Doshi, the heroine is just about okay in her role but has not much screen time and is there just for the sake of it. After a long time, Banerjee gets a good role and does justice to it. The BGM of the film is also quite impressive. The climax of the film has also been handled well.

One of the biggest drawbacks of the film is the jaded narration. The thrill which is required in a basic thriller is missing in the film from the start. Scenes are not gripping and the director fails to hold the audience with his narration. The investigative theme and what happened in the story, such things do not create any curiosity.

Upon this, the lead, Prudhvi sleepwalks in his role. Though he is good looks-wise, emotions, and performance-wise, he was a big drawback. His role and the way he goes about finding the basic twist should have been engaging but that is not the case as the main protagonist is quite dull most of the time.

The pace of the film is dead slow and the romantic angle does not work one bit. Upon this, the songs disturb the flow. Logic also goes for a toss. The IT Raid scenes, police investigation, all these aspects are dull and over the top.

Coming to the director, Sreevardhan, his story idea is good but his selection of artists is pretty bad. Upon this, his narrative has no grip. His script looks good on paper with a good twist in the end. But to showcase that he has not written a gripping screenplay and this where the film goes for a toss.

On the whole, IIT Krishnamurthy is a suspense thriller that fails to make an impact. The weak casting, dull narration, and slow pace hamper the film’s flow completely. Barring some interesting scenes in the second half and a decent twist at the end, this film has nothing much to offer and ends up as a dull thriller.