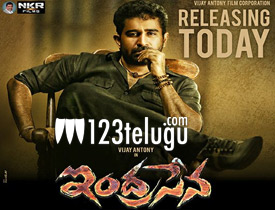 Vijay Antony’s latest outing, Indrasena is carrying a decent buzz all over. After a good round of promotions, the film has finally hit the screens today. Let’s see how it is.

Indrasena is all about two twins Indrasena and Rudrasena played by Vijay Anthony. When everything seems to be going well in their lives, Indrasena commits a murder and is sentenced to prison for seven years. Soon after this, Rudrasena, who is a good guy, transforms into a street rowdy. What actually happened in these seven years? Why did Rudrasena choose a wrong path? How will Indrasena solve all the major issues and set his family right? To know this, you have to watch the film in theaters.

It is known fact that Vijay Antony is not a brilliant performer but he tried his best to show decent variations in both his roles. He shows settled performance in Indrasena’s role and opened up as an aggressive guy in the Rudrasena character.

The interval block is good and raises curiosity about the latter half. A few family emotions showcased in the second half bring depth to the proceedings to an extent.

One the major drawbacks of the film are its slow-paced narration and dull proceedings. The way the brotherly emotions are showcased lacks proper depth and naturality.

Yet another minus point is that the film deals with too many subplots which lack proper connectivity. The girl who acted as Rudrasena’s love interest has absolutely nothing to do with the film. Her role and a song which comes out in the first half are unbearable.

Director G. Srinivasan’s idea of making a film on brotherhood is good but he miserably failed in narrating it in a gripping manner. Rather than creating too many subplots, he should have narrated the story in a straight and interesting manner by adding enough commercial elements.

Editing work is just okay as the film’s runtime is hardly two hours. The Cinematography is good and apt for the mood of the film. Music by Vijay Antony is not up to the mark as the film has neither proper songs nor a good background score. Production values for this limited budget film are okay.

On the whole, Indrasena is a sacrificing tale of a good guy called Indrasena. Though the film has a good storyline and some hard-hitting family emotions, too many subplots and unwanted diversions disturb the flow of the film. All we suggest you is keep your expectations in check as the film does not have any different story as associated with all Vijay Anthony films and ends up as just an okay watch this weekend.