Review : Inkokkadu – Only for Vikram 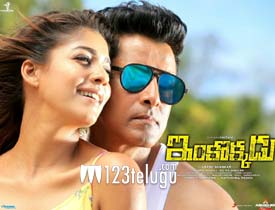 National Award winner Vikram, is back with yet another interesting film Inkokkadu. The action entertainer which has the star hero in a double role has hit the screens all over today. Let’s see how it is.

Th entire Malaysian police are busy cracking a mysterious case about a dreaded criminal called Love(Vikram). They have no idea about him and where he operates from. One fine day, they get a clue that an ex-RAW agent, Akhil(Vikram) had a personal vendetta against Love and was dealing the case four years back.

They hunt Akhil down and ask him to take up the case. Who is this Love ? What personal problem did Akhil have with Love ? How did Akhil tackle this case ? and where do Nayanthara and Nithya Menen feature in this entire set up ? That form the rest of the story.

Vikram is the heart and soul of the film. It is his double role which attracts the audience right away into the proceedings. The star actor is especially good as Love. Be it his body language, dialogue delivery and walking style, he is a treat to watch whenever he is on screen.

Nayanthara plays a different role and has very good screen presence. The interval bang leaves you with a surprise and sets the film up nicely. The first half has good chases, interesting investigation scenes, and superb performances.

Special mention should go to Harris Jayraj’s background score which elevates the film to another level.

After a gripping first half, things get slightly slow as the film loses its pace in certain areas. Also, the presence of two songs in unwanted areas disturbs the flow of the film to an extent.

Off late, Nithya Menen has been doing these small roles which do not have any weight in the film. She is wasted in her role as Vikram overshadows her completely throughout the film.

After a point where the twists are revealed, the second half becomes a bit predictable and it is left to the villain character played by Vikram to bring spice into the proceedings.

Inkokkadu is very strong on technical aspects. Production values are superb as the action entertainer looks quite stylish. Even the way all the characters have been styled is very good. Inkokkadu is a screenplay based film which runs in investigation mode. The director Anand manages to engage the audience well during the first half but falters during the later part.

Music is just about okay but as said earlier, the background score is a highlight. The camerawork is stunning and showcases Malaysia and its surrounding quite well. Editing is below average as many scenes and a song during the second half could have been edited out.

On the whole, Inkokkadu is a unique action entertainer which has its moments. Engaging first half and Vikram’s performances are a huge plus. This is a kind of film which will be liked only by action film lovers and general audience who love popcorn entertainers, might get disappointed. Finally, if you manage to ignore the lacklustre second half and predicatble storyline, you can give this film a shot for Vikram who is awesome as LOVE.