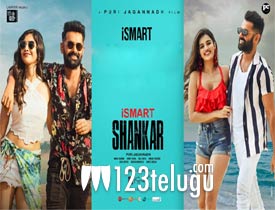 Puri Jagan has been lying low with back to back flops in his career. His new film Ismart Shankar has hit the screens today and lets see whether it gives Puri his much needed hit or not.

Ismart Shankar(Ram) is a crazy contract killer who murders a high profile politician. Cops start chasing him and Shankar escapes with his girlfriend(Nabha Natesh). On the other hand, Arun(Satyadev) is a cop who is handling the same case. Just when he is about to nab the actual culprit behind the murder, he gets killed. In a crazy turn of events, the cops transfer Arun’s memory to Shankar. What is this whole memory issue?  What has Ismart Shankar  to do with it? That forms  the rest of the story.

No one other than Ram would have pulled off the role of Ismart Shankar. Ram’s transformation is mind blowing and Puri showcases him in a never before seen manner. Be it his dialogue delivery, dances or mass screen presence, Ram is a treat to watch on screen and is very lovable in his role.

Nabha Natesh is impressive as Chandni and provides superb eye candy for the masses. Her chemistry with Ram is also good as she did well in her limited screen presence. Niddhi Agarwal gets a good role and does her best in the film. Ashish Vidhyarthi is neat and so was Satyadev as the cop.

The film has full on commercial elements which will be loved by the masses. The lead pair’s dialogues, songs and glamor quotient, Puri is spot on with these factors. Ram creates good comedy with his mannerisms and action. The first half is decent and the interval bang of memory transfer is brought in well.

One of the biggest drawbacks is that the story is the same old Puri mark cop drama. The only difference here is that Puri has added a memory transfer concept and made the hero a bit different. But sadly, he does not make use of the concept well.

There are many scenes in the second half which defy logic. Ram’s character lacks clarity and is showcased in a confusing manner during this time. Also, the plot of family politics is age old and does not create any impact.

The screenplay goes for a toss in the second half as the film slows down in many areas. Climax of the film is also routine. Every scene runs on Ram’s screen presence and if you omit that, there is nothing new that this film has to offer. The film has double meaning dialogues and lot of violence which will be a bit uncomfortable for the family audience.

Production values of the film are top notch as Charme has handled things in a superb manner. Every location and visual looks authentic and gives the film a rustic vibe. Music by Mani Sharma is the biggest asset as all the songs provide good entertainment and have also been shot well.

Ram has been styled supremely well in the film. Editing is decent and so were the lyrics of all the songs. Coming to the director Puri Jagan, his strength has always been the characterization of his heroes and in this film too, he is spot on. He showcases Ram in a superb manner and makes the film watchable only because of Ram. If he had managed the memory transfer concept well, things would have been a lot better for the film.

One the whole, Ismart Shankar is an unapologetic full on mass masala entertainer aimed at the masses. Ram’s crazy makeover will be loved by many. His one man show and good music make the otherwise ordinary story and dull narration click in several areas. All you need to do is to ignore the logics and go with the flow and enjoy the so called popcorn entertainment thrown at you.