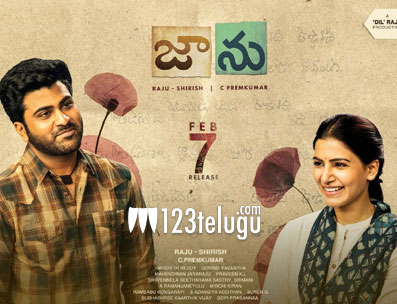 Dil Raju received a lot of flack when he decided to remake the cult Tamil hit 96 in Telugu. Titled Jaanu, this film has hit the screen today and let’s see whether it lives up to all the hype or not.

Ram(Sharwanand) is head over heels on his high school sweetheart Jaanu(Samantha). He never proposes to her and as time passes by, destiny keeps them apart. After fifteen long years, both Jaanu and Ram reunite through their school reunion. To know what goes on between these two after all these years, you need to watch the film on the big screen.

Remaking such a classic is no joke and credit should go to director Prem Kumar who has managed to keep the soul intact. One can say that the film is a faithful remake with superlative performances by the lead pair.

Sharwa, who was going through a low proves what a solid actor he is. He gives his career best performance and nails it as Ram. Be it the innocence or the maturity in emotions, Sharwa takes it to another level with his endearing performance. He stands as the biggest highlight of the film.

For Samantha too, it was the toughest role but boy, she delivers it once again. The star in her takes a back seat as Sam becomes Jaanu and delivers a heart-wrenching performance. She brings tears to your eyes with her emotional act and is too good during the climax. With each film, the actor in her is taking rapid steps.

The chemistry between the lead pair is the biggest asset. No other actors besides Sam and Sharwa would have pulled this off. The young lovers showcased in the film have done a good job. The BGM is superb and is the heart of the film.

Vennela Kishore gets another good role and he charms you with even in his limited screen presence. Tagubothu Ramesh gets a neat role and he too impressed. Saranya Pradeep was apt as Sharwa’s friend and brings a depth to the film.

As the film is a remake, many will have mixed reactions and will draw comparisons from the original. So, for them the film might be a bit dull. The film is a clear A centre multiplex film with not much entertainment.

The pace of the film is quite slow and one needs patience to enjoy the proceedings. There is no great drama or twists in the love story as the narration is plain. So a section can find it tedious.

Production values of the film are top notch as the period visuals in Vizag and school set up have been showcased supremely well. Music by Govind Vasantha is also good. Special mention to Chinmayi who has done a solid job with her dubbing for Sam.

Dialogues are simple yet create an impact. Production design is also quite good. Coming to the director Prem Kumar, he has done a sincere job with the remake as well. He kept the emotions intact and did not try anything new.

On the whole, Jaanu is a faithful remake that has the emotions intact from the original. The film will surely draw comparisons as those who did not see 96 will like the film and all those who watched it will find it slow-paced. The film is clearly an A center and multiplex film but Sharwanand and Samantha give career-best performances and shoulder the film till the end and making it a decent watch this weekend.