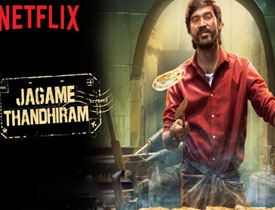 Even though Jagame Thandhiram was supposed to hit screens in May initially, the COVID second wave and the subsequent lockdown had forced its makers to skip the theatrical release and opt for a direct OTT release. Let’s see how the film is.

Suruli (Dhanush) is a reckless and flamboyant gangster in Madurai. He also runs a small hotel. He lands himself in trouble after he kills a person. Suruli’s boss asks him to go underground until the tension eases.

That’s when Suruli is approached by a couple of henchmen from London to unearth a local gangster named Sivadas (Joju George). Suruli heads to London and joins his new boss Peter (James Cosmo), who is vehemently against immigrants.

While chasing down Sivadas and his gang, Suruli falls in love with Athila (Aishwarya Lekshmi) and proposes to her. Soon, Suruli faces the murky reality of the immigrants and their decades long struggle for identity. Will Suruli oppose his boss Peter and fight for the immigrants? You have to watch the movie to know the rest of the story.

Dhanush as the flamboyant village youth who lands in London shines in his role. In fact, he shoulders the entire film with his spirited performance. He is at complete ease in the Madurai as well as the London episodes. He is effortless in dances and fights, as usual.

Acclaimed Malayalam actor Joju George once again gives a commendable performance and makes a striking impression. Game of Thrones fame James Cosmo’s presence adds depth to the film. Malayalam actress Aishwarya Lekshmi is elegant and emotes well in her role of a singer. Other actors too make their presence felt in their given roles.

Lackluster script and screenplay are the main drawbacks of Jagame Thandhiram. After starting off the film on an interesting note, and following it up with an engaging Madurai episode, writer and director Karthik Subbaraj slows down the proceedings when the story heads back to London.

Too many characters, incoherent characterisations, especially for the female leads, and pointless scene setups act as roadblocks to the narrative. As a result, the film’s main objective of highlighting the immigrants plight is lost in translation.

Acclaimed Tamil composer Santhosh Narayanan’s blazing background score is one of the main highlights of Jagame Thandhiram. A couple of songs, Rakita Rakita and the title track Suruli, stand out from the rest of the album. Cinematography too takes a major credit for making JT look top-class and stylish. Shreyaas captures the London underbelly quite well. The main plotline of the film and the rich production values are the other highlights of JT.

Unfortunately, Jagame Thandhiram promises a lot with its unique storyline that’s never been explored in Tamil Cinema and the star cast, but ends up delivering too little. The film clearly falls short of the high expectations it has set prior to its release and ends up as one of the major disappointments of this year so far. Dhanush’s energetic performance will impress his fans, but the snail-paced narration will test your patience. Do keep your expectations low if you are planning to watch this action drama this weekend.