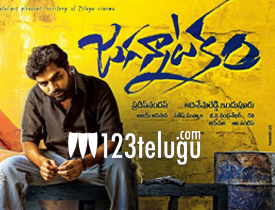 Pradeep Nandan, an assistant of Chandra Sekhar Yeleti is making his acting and directorial debut with ‘Jagannatakam’. This film has hit the screens today and let’s see how it is.

Prudhvi (Pradeep Nandan) is a cheerful guy who lives along with his father and sister(Upasri). His only aim in life is to become an actor. One fine day, he comes across Bhanu (Khanesh Chandran) and falls flat for her.

As time passes by, even Bhanu accepts his love and the couple spend some happy times together. When everything seems to going fine, he gets a huge break to act in a big budget flick. Elated with this, Prudhvi throws a party to all his friends. While partying, Prudhvi receives a dreaded call that his father has passed away. He quickly rushes back home only to find out that his sister has been kidnapped.

What happened to his sister ? How did his father die ? and How does Prudhvi solve all his problems ? To know answers to these questions, you need to watch the film on the big screen.

The way hero’s character has been designed is good. Thrilling narration in the second half and the last twenty minutes will excite the audience decently. Background music is yet another attraction of this film. Interval bang is also executed well.

Pradeep Nandan has acted with a lot of zeal and carried great energy levels throughout the film. The female lead, Khanesh Chandran has also done a fair job and is especially good in the romantic scenes. Avinash manages to bring in a few laughs in his Mr. Theif character. The remaining supporting cast also performed to the best of their abilities.

Major drawback of this film is the revenge drama format which has been told in many movies. The director has unnecessarily dragged the movie for two and half hours which tests the patience of the viewers. The screenplay is also not convincing and confuses the audience. Story line is quite predictable and lacks interesting elements.

Lot of characters in the movie needed a justification. Misplaced songs in the first half is also a big minus. The villain’s character is below par and has not been elevated well.

Pradeep Nandan’s direction is below par, and the concept he has chosen is also quite old. He leaves too many points uncleared and makes it quite confusing for the audience. Music is pretty decent and so is the cinematography. The way the night effect scenes have been showcased looks good. Dialogues are simple and production values are pretty good.

On the whole, Jagannatakam is a complete screenplay based film. A decent second half and an exciting last twenty minutes are some assets. But a lack luster first half, unnecessary songs and forced comedy spoils the flow of this film. All those who like watching different films can give this film a shot if they have absolutely nothing else to do.