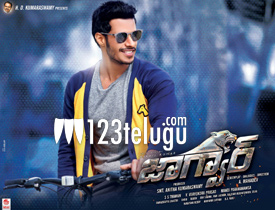 Jaguar is one film which created a huge buzz for various reasons. The film marks the debut of Nikhil Gowda, who is the grandson of ex-prime minister Deve Gowda. The action entertainer which has some big names associated with it has hit the screens today. Let’s see how it is.

Krishna(Nikhil) is a simple medical college student who is behind some crazy murders of high profile people in the medical business. He targets these businessmen and starts killing them by wearing a disguise called Jaguar.

The police appoint a CBI officer(Jagapathi Babu) to nab Krishna but he too fails in doing so each and every time. Why is Krishna doing all these murders ? What is his motto ? and what does the disguise Jaguar have to do with the entire set up ? That forms the rest of the story.

Production values of the film are superb as the huge amount spent shows in every scene. The basic plot by Vijendra Prasad is the biggest plus of the film. The way the story has been set up in a medical college looks interesting.

Nikhil Gowda makes an okay debut. Even though he looks naive for his first film, he is well trained and has done wonderfully well with his dances and fights. Sampath has a very interesting role and does his best. The last fifteen minutes of the film are quite interesting.

For a change, bad guy Adarsh Balakrishna does a positive role and impresses heavily. His performance throughout the film is very good and brings a depth to the film. Tamanna’s item song brings some eye candy.

The first thing that comes to your mind after watching the film is that Jaguar should have been made with a popular Telugu hero. Even though the young hero does well, the plot is so strong that a mature and senior hero would have done wonders with it. Ramya Krishna is there only for a few scenes. Rao Ramesh gets a routine character once again.

After an engaging first half, the first half an hour gets silly with the entrance of Brahmanandam. The hero staying with the villains and the main plot getting side tracked for a bit looks stupid. Jagapathi Babu’s role is ended abruptly and has no clarity.

As said earlier, the film has some awesome visuals. Special mention should go to the fight composers who have canned some sleek chase sequences. Camera work is pretty good as the entire film has the feel of a top hero film. Thaman’s music is just average but his background score is quite impressive.

Coming to the director Mahadev, he has done an okay job with the film. He showcases the various murders and college scenes well in the first half and sets up a good second half. But he too falls for the commercial plot and takes the film down during the initial part of the second half. It is only during the last fifteen minutes that film stands back on its feet.

On the whole, Jaguar has a very interesting plot which has been let down by the lack luster second half. Superb production values and some decent thrills are basic assets of this pakka commerical formula film. Now that there is heavy competition for Dussera, it would be really interesting to see how this below average action entertainer fares at the box office.