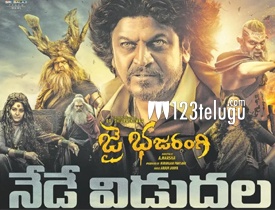 Kannada superstar Shiva Rajkumar’s latest high budget entertainer, Bhajarangi 2, is a sequel to the 2013 superhit, Bhajarangi. Starring Malayalam actress Bhavana Menon as the female lead, the Harsha directorial had its theatrical release today. Here’s our review of this highly-anticipated film.

Anji (Shiva Rajkumar) is passing his prime but is unable to get married. His sister assures him that she will find a suitable bride for him. On the other hand, a drug mafia gang employs the descendants of the Dhanwantari dynasty to make narcotic drugs out of ayurvedic medicines. In a dramatic turn of events, Anji is beaten up and his sister kidnapped by the drug mafia gang. A helpless Anji ends his life by suicide. Then, Bhajarangi’s (Shiva Rajkumar) soul enters Anji’s body. Who is Bhajarangi? What is the connection between Bhajarangi and Dhanwantari medicine? How does Bhajarangi eliminate the drug mafia gang? You need to watch the movie in cinemas to know the remaining story.

Kannada superstar Shiva Rajkumar is impressive as usual with his performance. He shines in the dual roles of a helpless Anji and a mighty Bhajarangi. The film has a strong and touching point of a man’s sacrifice to serve the society through Dhanwantari medicine.

The film’s story has strong emotions and the action scenes in the interval and the climax episodes are the major highlights of Bhajarangi 2. Some crucial scenes in the second half are the main backbone of the movie. The scene where heroine Vedika (Bhavana) falls in love is very interesting. She is quite impressive in a role that has not much scope for performance. Rest of the actors gave their best in their given roles.

Even though the main plot of the movie is very interesting, the screenplay and treatment fail to impress. Too many unimportant scenes and unnecessary heroism elevation scenes and action sequences spoil the narrative flow and slows down the proceedings to a huge extent.

The director fails in translating such a strong theme onto the big screen in an interesting manner. Even though the story had a good scope for intense emotions, the first half largely runs on a silly note, there by diluting the overall experience.

Even though director Harsha succeeds in picturising action sequences, his underwhelming story and screenplay dilutes the overall movie. Swamy J Gowda’s cinematography is decent. He captured the scenes in the second half and the climax quite well. While the background score composed by Arjun Janya is impressive, the songs fail to enthrall the audience. Editing could have been better. The production values are decent.

On the whole, Bhajarangi 2 fails to live up to the expectations. The film’s main plot, the well executed action sequences and the emotions Sandalwood superstar portrayed by Shiva Rajkumar in his Bhajarangi character will impress the audience and especially Shivanna’s fans. However, the lackluster treatment of such a good theme and the underwhelming screenplay, especially in the first half, fail to engage the audience. You may watch Bhajarangi 2 if you are a Shiva Rajkumar fan.