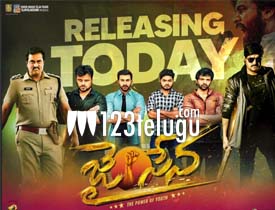 Senior director V. Samudra’s latest film, Jai Sena, a social drama based on farmer issues has hit the screens on January 29, 2021. Let’s see how it goes.

Inspired by the ideologies of Pawan Kalyan, four agriculture engineering students played by Karthikeeya, Abhiram, Praveen, and Harish Gautam decide to help farmers in building a lift-irritation project in their village. In this process, they approach their MLA cum minister Election Reddy (Madhusudhan Rao), and ask for his support to the cause. As the MLA refuses to sanction the project, the four friends loot Rs 200 crores from the minister’s illegal bank accounts. This is the time a tough cop named Devadas(Sunil) comes into the picture? How will the friends manage Devdas and the ML forms the rest of the story?

Four newcomers Karthikeeya, Abhiram, Praveen, and Harish Gautam did a decent job in the lead roles. They tried to carry the film on their shoulders which is an appreciable thing.

Sunil as an aggressive cop is good with his performance. Though he enters the scene only after forty-five minutes, the proceedings start gaining some momentum only after his entry.

Srikanth, Taraka Ratna, and Sreeram are okay in their extended cameo roles. Comedian Prudhvi evokes decent laughs in the first half of the film.

Though the film is all about farmers and the issues related to them, most of the sub-plots showcased are ended abruptly. As the film lacks proper establishment in the first half, things look tedious with boring college scenes which is a major minus for the movie.

As said above, the film gains some momentum only after it enters the core point in the second half. But unwanted deviations like elevating Sunil’s character and inserting Prudhvi’s comedy totally spoil the mood of the audience. The lack of proper commercials elements and a loud atmosphere is also negative for the film.

Being senior director, V. Samudra came up with a decent storyline related to farmers but failed in narrating it in an engaging way. He should have executed the story in an even better way by spending some more time on the screenplay and dialogues version.

Editing by Nandamuri Hari is adequate as most of the scenes in the film end up abruptly. Cinematography work is just okay and so is the case with the music. The background score for the film is too loud and noisy. Production values for this limited budget film are decent.

On the whole, Jai Sena is a social drama based on the farmers’ problems but lacks depth in the proceedings. Though the film has a few good episodes here and there, the narration suffers from several loopholes making it a film with below-average content.