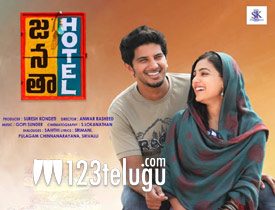 The hit pair of Nithya Menen and Dulquer Salman have come back together with the dubbed version of their Malayalam hit Ustad Hotel. The film has hit the screens today with the title Janatha Hotel and let’s see how it turns out to be.

Faizi(Dulquer Salman) is the only son who grows up along with his four sisters. After a point of time, he leaves for Switzerland to study a hotel management course. But there, he enrolls in a chef’s course and lies about it to his dad. The twist in the tale arises when he reveals this truth to his dad when his alliance gets fixed with Shahana(Nithya Menen). Both the father and son get into a fight and an upset Faizi leaves for his grandfather’s village. There, he gets stuck with Janatha hotel which is owned by his grandfather. Rest of the story is as to how Faizi learns life lessons in a harder way and also revives Janatha hotel.

Dulquer Salman leads from the front and gives a settled performance. Not only with his looks but the way he portrayed a role with multiple layers showcases his talent. The hotel set up and the manner in which things are made simple and realistic for the audience looks good.

Nithya Menen looks cute and gives a solid performance. Her chemistry with Dulquer is top notch and adds a good depth to the film. Senior actor Tilakan did a neat job in his key role. All his scenes with Dulquer have come out quite well and leave you teary-eyed in many places. The mood of the film has been kept light as there is not much melodrama as emotions are conveyed neatly.

The first fifteen minutes of the second half is quite slow. As the film is an emotional drama, the proceedings take their own time and do not have many commercial elements.

The way Dulquer changes his mind for his grandfather and how he evolves in life should have been showcased in a more interesting manner. His role lacks clarity in certain areas.

Even though the chemistry between the lead pair is good, the love story showcased is a bit dull and has nothing new to showcase. The message showcased through the film should have been narrated in a more comprehensive manner.

Gopi Sundar’s music is soulful and gels with the narrative quite comfortably. Lokanathan’s camerawork is top notch as it showcases the village and beach visuals beautifully. Editing is below par as certain scenes which obstruct the free flow of the film could have been easily trimmed. Coming to the director Anwar Rashid, he has done a decent job with this emotional drama. Even though he narrated the film with emotional moments, story wise there is nothing new which keeps you hooked.

On the whole, Janatha Hotel is the coming of age story about a chef with a few decent emotional moments. Dulqer leads from the front with his settled performance. The film does not have the regular commercial elements and is for those who like slow and meaningful dramas which do not have anything new story wise. If you are okay with the above-said things, give this film a shot this weekend.