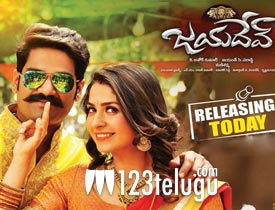 Jayadev marks the debut of minister Ghanta Srinivasa Rao’s son Ghanta Ravi. The cop drama is directed by Jayant C Paranji and has hit the screens today. Let’s see how it is.

Jayadev(Ghanta Ravi) is a sincere police officer who gets involved in a deadly murder case of a cop. Upon his investigation, he comes to know that a dreaded liquor don(Vinod Kumar) is behind all this. Rest of the story is as to how a sincere and simple sub-inspector like Jayadev tackles the mighty Don and puts him behind the bars.

Debut hero Ghanta Ravi is okay and has a long way to go in terms of acting. He has a good physique and will nicely fit serious roles if used well. With time and more films, he should do better. The heroine of the film, Malavika Raj looks quite glamorous and provides good eye candy for the audience.

Vinod Kumar plays a key role after a long time. One of the fights where the hero hides his face has been shot quite stylishly. The way the problems that cops face have been showcased in an interesting manner. Some investigation scenes have been handled well.

Jayadev has a very old school storyline and is predictable to the core. Right from the first scene you exactly know what is going to happen next as there are no major twists or turns.

It is very disappointing to see a director like Jayanth C who made films like Preminchukundam Raa direct this film in such a bad manner. The villain’s track is so poor that there is nothing else to look forward as the film moves on some silly and loud scenes most of the time.

Even the proceedings that are showcased have no meaning at all. The way hero loses his job and his struggle to get back, all this has been showcased in a very poor manner. There is scope for good elevation scenes which have been not utilized properly.

Production values of the film are just average. Music of the film is okay and so was the background score. Camera work was pretty decent and showcased the cop set-up in an interesting manner. Editing is pathetic as at least 15 minutes could have been easily chopped off. Coming to the director Jayant C Paranji, he has just sleep walked through the film and his lack of grip on the script is clearly visible in this remake.

On the whole, Jayadev is a too heavy subject for a debutante like Ghanta Ravi. He should have chosen a simple film to make his entry in Tollywood. Even though he tries hard in his role, the disappointing narration and lack of any gripping moments take this film down and makes it a strictly below average watch this weekend.