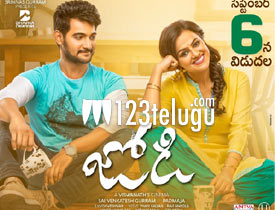 Jodi has been in the making for over two years now. The film has Aadi Sai Kumar and Shraddha Srinath in lead roles. The family drama has hit the screens on a silent note today and lets see how it turns out to be.

Kapil(Aadi) is a software employee who falls in love with Kanchanamala(Shraddha Srinath). Just when everything seems to be going fine, Kanchanamala’s father rejects the marriage proposal all of a sudden citing Kapil’s dad(Naresh) as a huge problem. What problem does Kanchanamala’s dad have with Kapil’s dad? How will Kapil solve this issue and win Kanchanamala’s hand? That forms the rest of the story.

Jodi was supposed to be Shraddha Srinath’s debut film in Telugu but Jersey released first. She does an impressive job, looks young and has a good role in the film. Shraddha has been showcased beautifully in the songs and she is neat with her acting as well.

Aadi is way better than his previous films and does not go overboard in his role. He does his best in the given role and shares a good chemistry with Shraddha. It is very good to see senior actor Gollapudi in a very good role after a long time.

Naresh is neat in his role of an cricket betting addict and the bad guy Pradeep is also okay. A few comedy scenes featuring Vennela Kishore and Satya are good. The first half has a few decent emotions and romance between the lead pair.

One of the biggest drawbacks of the film is the routine and age old storyline. There is nothing new that this script offers as you will guess the twists easily one after the other.

Even though there is no story, the director manages the first half in a passable manner as he adds humor, romance and some decent emotions. But from thereon the film falls flat on its face.

The second half has no direction whatsoever as forced emotions, comedy and silly scenes are thrown at the audience time and again. Logic goes for a toss during this time and the villain angle is somehow added in the setup which does not look good.

Too many routine scenes play spoil sport and the climax is a big letdown as a funny wedding setup is shown where the villain is made a scapegoat. Stuff like this has been showcased in many films previously and Jodi is no different.

Production values of the film are pretty good as the visuals look colorful because of the impressive camera work. Songs by Phani are just about okay and so was the background score. Editing is a huge mess as the film can be trimmed easily for 12 minutes or so. Even though the film has been delayed it looks fresh. Lyrics are okay but the dialogues are quite impressive.

Coming to the director Vishwanath, he has selected a very outdated story and tried to add the commercial aspects to it. He starts the first half well but makes the later part a mess. He failed in narrating the basic emotions in a flow and made a Kichidi out of the proceedings boring the audience.

On the whole, Jodi is a very outdated and ordinary family drama which will end up as yet another disappointment for Aadi. The first half has some brief breezy moments but the second half bores the audience with forced emotions, comedy, and over the top narration. Shraddha Srinath is the only solace of this film where everything else sinks.