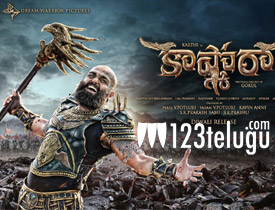 The promos of Kashmora have been creating huge waves all over the media. Karthi’s look in particular has raised huge curiosity for this film which has released all over today. Let’s see how it is.

Kashmora(Karthi) is a small time crook who pretends to possess some special powers of taking to the ghosts. He cheats a huge politician and runs away with his money.

The twist in the tale arises when he gets stuck in a huge forbidden bungalow which has a past of over seven centuries and also some real ghosts.

How does Kashmora gets stuck there ? What is his connection with the bungalow and ghosts ? and where do Nayanthara and Sri Divya feature in this entire set up? That forms the rest of the story.

The concept of linking the current set up with the ancient fantasy element is very interesting and has been executed quite well. Karthi is the biggest highlight of the film and is superb in both his roles. While he evokes huge comedy as Kashmora, he surprises you with his look and performance as Raj Naik.

The way horror comedy, fantasy and suspense have been interlaced is yet another asset. VFX work needs special mention as the film has some top notch visuals. The second half has some very interesting moments featuring Nayanthara and Karthi.

One of the biggest minus points of the film is the excessive length. There are many scenes which can be easily edited out. The story in both the halfs takes its own sweet time to unfold and reveal the simple plot.

The fantasy element is over done a bit in the climax. Even though Nayanthara is good she appears only for a cameo and her sudden appearance in the climax looks silky. Raj Naik’s character and the story behind the fantasy is not that gripping and could have been dealt better.

Music of the film is horrible and so is the background score. A far better score could have elevated the proceedings to another level. Editing is average as the film can at least be trimmed by 10 minutes. Art direction and the way Karthi has been styled is just mind blowing.

Coming to the director Gokul, he has done a very god job with the film. His concept is interesting and credit should go to him for narrating the film in an entertaining manner with good doses of comedy. Had he handled the flashback episode well and made the film crisp, the output would have been ever better.

On the whole, Kashmora is quite a different film from the routine and outdated commercial flicks that are coming out these days. Karthi’s performance and decent comedy are huge assets of this horror comedy with good production values. If you ignore the excessive length and a few glitches here and there, Kashmora is a time pass entertainer which can be given a shot this Diwali weekend.