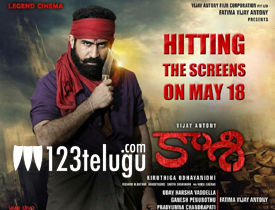 Vijay Anthony always comes up with interesting films and next in line is today’s release Kasi. The film has simultaneously released in Tamil and Telugu today. Let’s see how the film turns out to be.

Bharath(Vijay Anthony) is a well-established doctor in the US who comes to know that he is an adopted son and his roots are based in a small village called Kancharlapalem. Upset with this, he comes to the village and starts finding out about his past. After a point of time, he finds out about his mother but the whereabouts of his dad are left mysterious. Rest of the story is as to how Bharat finds out who his dad is and why he left him all alone in life.

Vijay Anthony does his role quite sincerely and performs to the best of his capabilities. He has done different characters in the film and all his roles have been executed well. Comedian Yogi Babu evokes fun to an extent in the first half.

The second half of the film is a tad better than the first where the actual story unfolds. Anjali is cute in her role but she has nothing much to do with the film. There are three stories which are showcased one after the other and the last one where Vijay plays a church father has some decent moments.

One of the biggest drawbacks of the film is that a simple point is dragged to no extent. The first two stories are horrible and do not bring any depth to the proceedings.

The way Vijay Anthony goes about finding his dad is shown in an unnatural way. He meets different people and they narrate their stories which are showcased through Vijay as the lead. They are not only boring but lack a logical connection to the story.

The makers should have opted for a single flashback and ended things on a simple note which would have made it easy for the audience. After starting the film promisingly, the director loses track of things completely in the first half.

Production values of the film are decent as the makers have made sure that the movie does not have much Tamil flavor. Camera work is good and so was the production design which showcased the village visuals neatly. Telugu dubbing by Hema Chandra for Vijay Anthony is spot on. Music by Vijay Anthony is nothing great but his background score was impressive.

Coming to the director Udayanidhi, she has done a disappointing job with the film. Her story is okay but the execution is quite confusing. She is the one to be blamed as she makes the story complex by adding unnecessary subplots which bore the audience. Except for the last story, rest of the entire film is sidetracked because of the lack of depth in the narration.

Vijay Anthony’s films have some good plots and decent emotions but that is not the case with Kasi which lacks basic depth in the proceedings. A simple and clean story is messed up by some wayward execution and unnecessary subplots. Except for Vijay Anthony’s sincere performance, this film does not have anything that will interest the audience. So, look for better options to kill your time this weekend.