Review : Kabali – Not a Rajini film 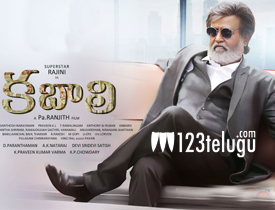 Kabali, the most awaited silver screen sensation which has left millions of Rajini fans and movie lovers in a frenzy over the past few months has finally hit the screens worldwide today. Let’s see how the film fares:

Kabaleeswaran alias Kabali (Rajinikanth) is a revolutionary gang leader fighting for the rights of the migrant Telugu workers in Kuala Lumpur, Malaysia. He takes on a ruthless local mafia lord named Tony Lee (Winston Chao) who plans a conspiracy and sends him to prison for 25 years.

Kabali releases from jail only to find his empire and family decimated and Kuala Lumpur being ruled by Tony Lee. Kabali sets out on a mission to take on Tony Lee once again with vengeance and in the process, finds out that his wife Kumudhavalli (Radhika Apte) is still alive. The rest of the story is all about Rajini taking his revenge.

Just like all his previous movies, even Kabali banks majorly on Rajinikanth’s unmatchable charisma. Rajini’s acting and his aura as Kabali, the ageing mafia don, are top notch. The Super Star shines particularly in the flashback episodes in which he plays a young and hot-blooded don.

Kabali is a treat for hardcore Rajini fans as Thalaiva enthrals them with his trademark style. Radhika Apte steals the show as Rajni’s wife. She had a crucial role which she essayed it with a lot of ease and dignity. Dhansika is quite impressive in her character.

Director Pa Ranjith comes up with a decent story line and tries to give the film an edge with some interesting scenes during the initial part of the film. Certain emotional scenes where Rajini fights for his wife and daughter have been executed quite well.

One of the biggest drawbacks of Kabali are the lack of Rajni fan moments. After the initial few moments, the stardom of Rajni takes a back seat and all those who expected a Basha kind of scenario and powerful drama is no where seen in the film

Yet another major hiccup in Kabali is the slow pace with which the story moves forward. The film’s second half is too lethargic and bores the audiences. The director couldn’t succeed in translating a powerful script onto the screen.

Director Ranjith succeeds in showcasing the film in a realistic way without giving in to the temptations of playing it to the galleries which might not go well with regular fans. Certain scenes that exploit Rajini’s emotions and character showcase Ranjith’s brilliance as a writer and director. However, Ranjith falters in narrating an intense story to all sections of the audience and makes the film very slow.

Music composer Santosh Narayan’s Nippu Ra theme song is an instant ear worm. His background score stands out from the rest of the technical aspects. Murali’s realistic cinematography which gives a refreshing outlook for the director’s vision deserves endless praise. Editing is bad as many scenes during the first half could have been easily trimmed. We can’t complain much about the lavish production values of producer Kalaipuli S Thanu which are pretty decent.

Being a Rajni film, everyone goes in with huge expectations of wanting to see their super star in a certain way. But with Kabali, things are surprisingly different as the narration and seriousness of the film spoil the experience. The film will only be liked by hardcore Rajni fans for their demi god’s stand out performance. But for the rest, Kabali ends up as a below average outing with not much entertainment going its way. All those who are hellbent on watching this film, our suggestion is to keep your expectations in check other wise you can get disappointed big time.