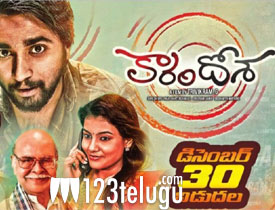 Continuing the trend of low-budget films, yet another project which has hit the screens today is Karam Dosa. Let’s now see how this film fares at the box office.

The story is based on the lives of three close friends who lead a carefree life. Everyone has their own set of problems but do not take things seriously at all. While one of them who has a job wants to get married at any cost, the other two are just wasting time without any goal.

This is the time that a Dosa center owner enters their lives and changes things around by showing them some enlightenment. Rest of the story is as to how these three friends plan something interesting and settle down in life.

The last fifteen minutes of the film are a bit interesting as the proceedings showcase how the three friends become successful in their lives. Shivakumar Ramachandravarapu does the lead role and is a bit decent in his performance. His role has been written well and has some good emotions during the last fifteen minutes.

The software testing comedy episodes brings some laughs here and there. Surya Sreenivas, Anil and Chandana do their bit well and try to salvage the film to an extent. The father-son relation shown in the film is decent.

The story of the film is very simple but the director takes the entire two hours to establish what’s actually going in the film. You never understand what are the main leads up to as their daily lives are showcased without any seriousness and meaning.

The scenes that come during this time test your patience and leave you looking for the exit door. Bad dubbing, silly scenes and lack of emotion in the film will get you at times. It is a short film idea which is blown up into a film and dragged to no extent till the last minute.

Production values are okay and so was the camera work. Music by Siddharth Watkins is pretty decent and brings some relief to the film. Dialogues need a special mention as they have been written quite cleverly with a lot of fun and good emotions during the climax. The screenplay is quite pathetic as a number of scenes keep coming in one after the other without any purpose.

Coming to the director Trivikram Gajulapalli, he has done a horrible job with the film. He has taken a good idea and blown it up into an entire film. Neither does his narration impresses you, nor his actors have much to do because of his amateurish execution. The last fifteen minutes are the saving grace where some emotions are showcased in the right way.

On the whole, Karam Dosa is a boring and dragged out drama which will leave you scratching your head big time. Until the last fifteen minutes, the proceedings are so slow and boring that you feel suffocated big time. The subject of this film could have easily been apt for a good short film but sadly, the makers spoil it even more by making it into a film which is pretty upsetting.